If there were any great bets for who you thought might win an Olympic gold going into the 2012 Olympic games, one of the more interesting bets would have been on the US women's eight boat. The United States women's eight boat was one of the favorites after spending four years dominating everyone, having won the gold in Beijing and three straight World Championships since that event.

It was no different Thursday afternoon. Mary Whipple from the University of Washington was the coxswain who won gold in 2008, and she helped steer the US women's eight boat to a dominant victory over Canada and the Netherlands. Their final time on the 2000 meter course was 6:10.59, beating Canada by 1.47 seconds and the Netherlands by 2.53 seconds.

And as you can see, the US women were happy to give Whipple a nice pat on the back for her accomplishments. Ryan Hudson of SB Nation provides us with this lovely photo. 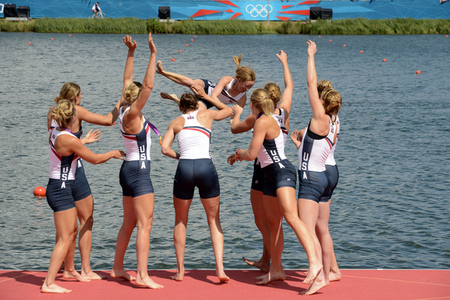 For full coverage of who's winning the medal count, check out SI's medal tracker here.