PHOTO: Felix Hernandez And Where The Wild Things Are

Share All sharing options for: PHOTO: Felix Hernandez And Where The Wild Things Are 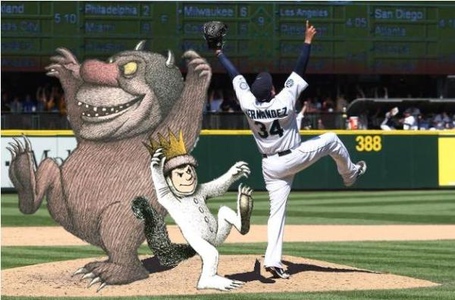 One of the coolest aspects of King Felix's feat was the amount of attention it brought to the Seattle Mariners in terms of national sports coverage. This photo came from ESPN's Pardon the Interruption.

Mariners fans are not used to seeing their team being praised on the national sports scene. Even when the team found success, being stuck in the Northwest corner of the United States prevented national news outlets and others to this day from giving the team its due credit. It's refreshing to see Felix get the attention his deserves despite being a member of the Seattle Mariners.