Have the Oregon Ducks finally gone as far as they can go with making fashion statements?

There have been so many versions of Oregon uniforms that it's hard to keep track of them all. Every combination from throwbacks to Nike Pro Combats to Dark Knight to monochromatic to Mountain Dewish has been put in play. Even fake uniforms are starting to look like real uniforms. You expect the unexpected when it comes to Oregon apparel.

If these new uniforms at the Oregon shop are any indicator, we might experience a bit of a downgrade in this department this season -- or at least for a couple of games. If you're a big fan of wings, you might like these uniforms, but otherwise, they aren't quite as distinctive.

Huh. Nothing too dramatic. Expecting a green twist on the Rose Bowl helmet too, at least. RT @silasbear new jerseys: twitter.com/silasbear/stat…

At least the potential new helmet looks pretty slick. 247Sports tracked it down here, and we're getting more of that shiny tint that gives Oregon its cutting edge look. 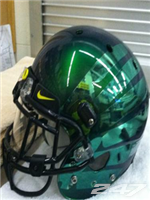 Check out Addicted to Quack for more Oregon football fans. You can also check out everything we have to offer at SB Nation's college football hub.