SB Nation Seattle's Kevin Cacabelos compiles his summer notes and observations on the state's top high school basketball talent in part one of his recruiting roundup featuring players from the class of 2013.

Now that the summer basketball season is over, it is time to revisit and introduce you to the top basketball recruits in the state of Washington. Part one (this article) covers prospects from the class of 2013, while part two (next article) will will include prospects from the class of 2014. These observations primarily come from games I watched this summer along with notes from state tournament and regular season games.

If you have any tips regarding the Seattle basketball recruiting scene, please contact me at kcacabelos@gmail.com or on Twitter @KevinCacabelos. (All photos are used with permission from local preps basketball photographer Jamie Corpus)

Brett Bailey (University HS, Spokane) 2013, SG, 6-foot-6, 195 pounds
Bailey is the most polished scorer in the state. He is a slasher who can use a myriad of shot fakes and pivots to finish around the rim and at mid-range. He can absorb contact and finish at the rim along with the ability to stroke it from three. On Spokane Pump N' Run he was forced to guard the post on defense in the game I watched, and he defended well despite being out of position. San Diego is getting a stud.

Patrick Ball (Franklin HS, Seattle) 2013, SG, 6-foot-5, 180 pounds
Ball is poised for a breakout season at Franklin HS. Projected at the two-guard position at the next level, Ball benefits from playing with teammate, Arell Hennings, who runs the point for both Franklin and Seattle Rotary Style. In addition to being Franklin's No. 1 scoring option, Ball's size will force him to defend the league's top guards. Cal State Northridge is currently showing the most interest.

Seth Berger (Ballard HS, Ballard) 2013, SG/SF, 6-foot-7, 190 pounds
Berger impressed national recruiting analysts and experts this summer. Berger hit a game-winning three-pointer for the Emerald City Pioneers in the Pump and Run Best of the Summer tournament to beat Dobule Pump Elite 17 in the championship game in Anaheim. Berger said "he loves to get to the basket" and labeled his pull-up jumper as his go-to move on offense. The two/three combo guard will be working to improve his ball-handling and his catch-and-shoot technique leading up to the season. Boston College, Drake, Florida State, Massachusetts, Santa Clara, UC Santa Barbara and Washington State are all showing serious interest in Berger.

Perrion Callandret (Bothell HS, Bothell) 2013, PG, 6-foot-2, 170 pounds
The combo guard excels in transition and projects well at the shooting guard position in college. His long arms enable him to grab rebounds and get into passing lanes on defense. He'll need to make adjustments on his jump shot - his release is slow right now. He'll also need to bulk up, he's a tweener right now and stronger guards will expose him on defense. Idaho has offered, while Wyoming, Saint Mary's, Portland State are showing interest.

Marquis Davis (Rainier Beach HS, Seattle) 2013, PG, 5-foot-9, 175 pounds
This undersized guard is streaky, but his leaping ability and overall athleticism make him an intriguing prospect at the next level. His jump shot is mechanical, but eerily similar to the form of former Rainier Beach stand-out Nate Robinson. Since he gets so much lift, his jump shot is difficult to block. He can get in the lane and is apt at finding his teammates when doing so, but sometimes can get into trouble when he over penetrates. As a point guard at the next level, he'll need to defer to his teammates more often rather than forcing contested shots up. Boise State has offered while California and Saint Mary's are showing strong interest.

Will Dorsey (Rainer Beach HS, Seattle) 2013, PG, 5-foot-9, 160 pounds
Like Franklin's Arelll Hennings, Will Dorsey is the floor general both for his high school team and his AAU team. The lefty has a killer crossover and is nifty and creative in finishing in the lane. Though he is short, he contains just enough hang time to absorb contact and finish at the rim. His decision-making is improving, but his playground style sometimes leads to turnovers.

D.J. Fenner (Seattle Preparatory, Seattle) 2013, SG, 6-foot-6, 206 pounds
Fenner is a scoring machine. His strong frame and height allows him to finish with contact when attacking the rim, but his mid-range game might be the best in the state. He can hit the baseline jumper, he uses the backboard effectively and he is creative at using his ball-handling to get past defenders and get to the basket. On defense, he creates opportunities for himself and his teammates by disrupting passing lanes. Offers: Delaware, Hawaii, Nevada, Seattle University, UC Irvine, Utah 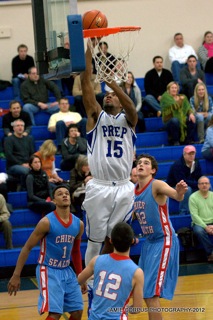 Tucker Haymond (Garfield HS, Seattle) 2013, SG, 6-foot-5, 210 pounds
The Garfield standout is versatile on the offensive end, aggressive on defense and has a strong basketball frame. I was impressed by his ability to play the post and use the drop set to score on smaller defenders. He has a quick catch-and-shoot jump shot release with good rotation and NBA range. He needs to improve his left hand and he sometimes gets into the habit of fading away on his jumpshot. Offers: Idaho State, Montana State, Seattle University, Western Michigan

Arell Hennings (Franklin HS, Seattle) 2013, PG, 5-foot-8, 150 pounds
Hennings took over the starting point guard duties for Seattle Rotary Style and shined in his role. As the team's floor general, he was great at distributing the basketball and keeping all of his teammates involved. If he wants to land a division one offer, he'll have to add a consistent pull-up jumper and improve his strength so he can finish his shots when he draws contact in the lane. Boise State and Oregon State are showing the most interest. 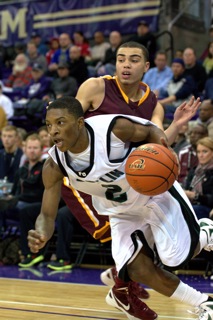 Corey Langerveld (Pullman HS, Pullman) 2013, SG, 6-foot-5, 180 pounds
Langerveld is the best prospect from Eastern Washington behind University's Brett Bailey. He said he usually gets compared to former Cougar standout Kyle Weaver because he is a long guard who can handle the basketball and also shoot it. Langerveld will not blow you away with his athleticism, but he is smooth and quick enough to score against smaller defenders.

Zach Lavine (Bothell HS, Bothell) 2013, PG, 6-foot-3, 165 pounds
The state's No. 1 player is one of the smoothest players I've watched at the high school level. He has a silky jumper that is effective from both mid-range and three. He has exceptional athleticism and will only get better as a point guard under the tutelage of Ben Howland at UCLA.

Tre'Shaun Lexing (Lincoln HS, Tacoma) 2013, SG/SF, 6-foot-6, 205 pounds
This lefty is long, athletic and provides vocal leadership on his team. He is excellent in transition because of his burst of speed and athleticism. He lacks a go-to offensive move and has a slow release on his jumper, but his long arms and size make him a high-level recruit. Lexing's long arms make him an effective defender as he can disrupt and block opposing players' shots. Previously Washington State was his leader, but right now his recruitment is wide open. Along with WSU, Cal Poly, Colorado, Gonzaga, Oregon, Oregon State, Santa Clara and Utah all have scholarship offers out to Lexing.

Djuan Piper (Rainier Beach HS, Seattle) 2013, SF, 6-foot-6, 175 pounds
Piper is another long and lanky wing prospect from Rainer Beach. This summer Piper improved his jump shot and pushed himself to be more aggressive on the offensive end of the floor. Piper iexcels in transition, and his long arms are assets on defense and allow him to create for himself on offense. His jump shot has a slow release and needs work; he'll also need to show he can create for himself off the dribble this coming season. Arkansas State, Cal, UCLA and Washington State are keeping their eyes on Piper. 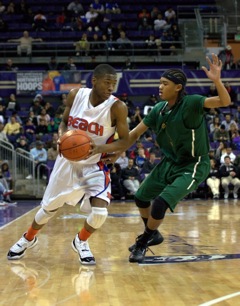 Caden Rowland (Mount Rainier HS, Des Moines) 2013, SG, 6-foot-5, 185 pounds
Rowland is an aggressive and crafty shooting guard. He's on the skinny side, but his long arms help him create offensively. He said he'll be working on his ball-handling and getting physically stronger in preparation for the season. Boise State, Cal Irvine, Cal Poly and Eastern Washington are recruiting Rowland.

Bayek Tutlam (Mariner HS, Everett) 2013, SG, 6-foot-4, 170 pounds
Tutlam is flying under the radar, but is one prospect to keep your eye on. He described himself as an athletic player who can knock down shots and is an improving defender. He's getting several looks from division two and three schools. He'll need to bulk up and improve his offensive skill set to play at the next level.