Stage 2 of the 2012 Tour de France is a flat run from Visé to Tournai, 207.5km that should end in a classic bunch sprint. The route, television coverage and online streaming information are all below.

The long, flat stage will likely see a breakaway spend most of the day in front, but expect the peloton to pull them back before the finish line and teams to rush to set up their sprinters for a crack at the victory. No conversation of sprinters goes without mentioning Mark Cavendish (Sky), and the British rider will surely be gunning for victory on Monday. He won't be alone: Stage 1 winner Peter Sagan (Liquigas-Cannondale) will be looking to continue his ascent into elite sprinter status, and men like Pacific Northwest native Tyler Farrar (Garmin-Sharp) and Andre Greipel (Lotto Belisol) will be just as eager to make their mark at the tour. 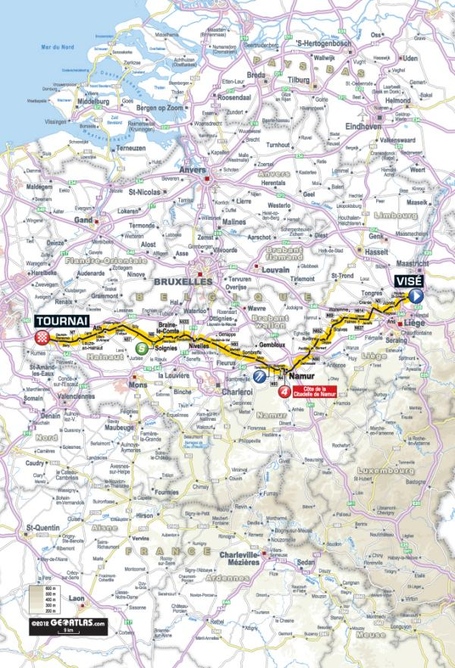 The GC standings are unlikely to move much in the stage, though tour leader Fabian Cancellara (Radioshack-Nissan) will have to be mindful that no one sneaks away with the stage. He'll have his team in support of that, including another Pacific Northwest rider, Chris Horner.

Stick with this StoryStream for recaps, previews and more from the 2012 Tour de France. For all things cycling, check out Podium Cafe.