Indulging In CenturyLink's Stadium Food: What To Expect This Coming Football Season

Share All sharing options for: Indulging In CenturyLink's Stadium Food: What To Expect This Coming Football Season

Levy Restaurants, the company behind the food and concessions at CenturyLink Field invited me and a friend to sample their featured July menu and a preview of their August menu during Wednesday night's Sounders FC match against Chelsea. My friend Krista was my partner in crime and helped me out in finishing some of the food that we were "forced" to eat.

Overall, I came away impressed by the variety and quality of options for fans. Levy Restaurants is preparing for a busy fall and winter that will not only host the Sounders until October and the Seahawks until December, but also will be the temporary home stadium for the Washington Huskies' football team this year.

As a former event staff employee at the once named Qwest Field during my high school years, it was refreshing to see so many new and different dining options around the stadium. The push to implement a local feel to the stadium's concessions is apparent and genuine.

Whether you are a Sounders fan, Seahawks fan, or a Huskies fan attending a game at CenturyLink field, trying out some of the unique stadium food is a must. While Krista and I are by no means professional food critics, neither are the thousands of fans who will eat food from around the stadium this fall and winter. With this said, here's an honest take from two fans' on the revamped local food and beverage options at CenturyLink Field. A big thanks to Levy Restaurants Executive Chef Lou Bastian for taking us around. 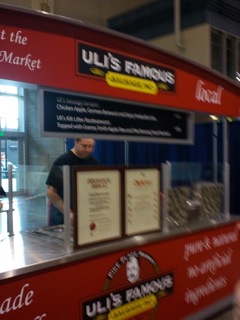 First up, Uli's Famous Sausage. Straight out of Pike Place Market, Uli's Famous Sausage is relatively new at the CLink and is turning into a popular item not only in the suites and club seats, but also on the Field Plaza level that is accessible to general admission ticketholders. The man behind the sausage, Uli Legenberg, will occasionally make appearances behind his stand on the plaza and throughout the stadium to serve fans his handmade and authentic German Sausages. 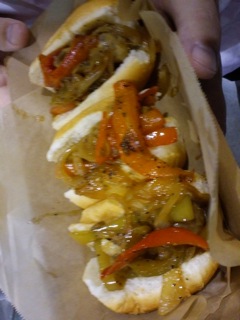 We tried out the sampler of three different types of sausages, with Krista declaring the Spicy Chicken Apple Sausage as "prime." I took on the traditional brat and dipped it in some German mustard — absolutely delicious. 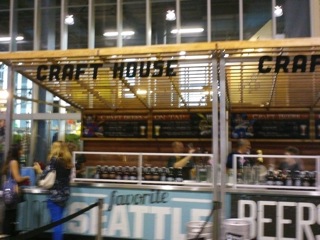 Unfortunately, because we were a year short of 21, we weren't able to try out the Craft House beers, but a quick glance at the menu reveals the concentrated effort by Levy Restaurants to incorporate a taste of Seattle. Here were a few available: Men's Room Original Red (an original from Elysian's Brewery), Monks Uncle (a favorite from Pike Brewery) and Space Needle IPA (a Seattle-themed brew from Pike Brewery). 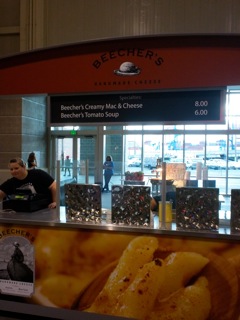 Beecher's Handmade Mac and Cheese: simple, yet so savory. I have a feeling this will be a popular food alternative to the typical Ivar's cup of chowder during those cold Saturdays and Sundays during football season. Beecher's is another local business from Pike Place Market that can be tasted at CenturyLink. This was the best mac and cheese I've ever had, hands down. Apologies to my mother, but I'm sure she'd agree, the melted cheese on the macaroni gave off a rich taste. 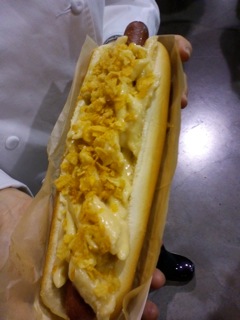 How could you possibly top that mac and cheese? Of course, you put that mac and cheese on a big hot dog, and then you top it off with some Tim's potato chips. Dubbed, "the Pike Place Market Dog", this masterpiece was one of the monthly "local features". The local features are creative spins on regular concession foods created by Levy's executive chefs. The goal with creating a product like the Pike Place Market Dog is a simple desire to be" "different than the general concession field and give outsiders a flavor of Seattle," remarked a Levy Restaraunts' employee. 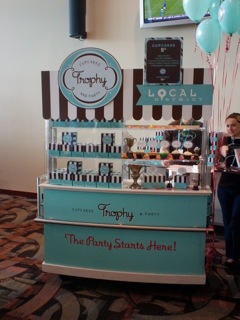 We then ventured to the Club Level where we found a new dessert stand: Trophy Cupcakes. By this time, Krista and I and the pair of chefs showing us around were stuffed. However, the idea of killing myself by eating the popular Chocolate Bourbon Bacon Brittle cupcake wasn't a far-fetched idea. Obviously, the average fan isn't eating a cupcake at a football or a soccer game, but Seattle isn't average. And as the stand says, "The Party Starts Here!"

Lastly, we were shown the Forest Mushroom Burger, and unfortunately our stomachs were too full to handle it. So instead of taking a picture of it, I had Executive Chef Jon Severson talk about another one of their "local features":

A few other stray thoughts:

For more on the Sounders and Seahawks and the CenturyLink experience, head over to Sounder at Heart and Field Gulls.

Indulging In CenturyLink's Stadium Food: What To Expect This Coming Football Season