According to the Seattle Times' Geoff Baker, Seattle Mariners first baseman Mike Carp has designed a t-shirt in honor of the late Mariners outfielder Greg Halman, who was stabbed to death in Nov. of 2011. The back of the t-shirt has Halman's name above his number like it would be on a jersey and written on top of the number is a quote from Hall of Famer Jackie Robinson, which says,"A life is not important except in the impact is has on other lives." 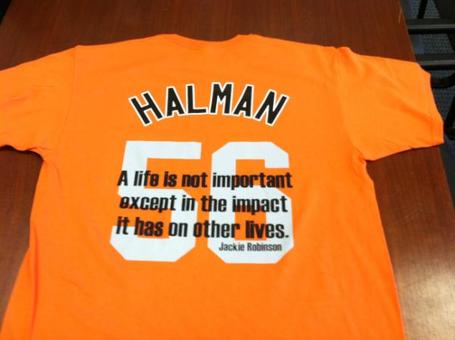 According to Baker, Carp wants to have the t-shirt sold in the team shop so the money can be donated to the Halman's family charity, but he has to get permission from the team first.

@gbakermariners
Geoff BakerCarp tells me he and players today discussed giving Halman shirts to team store. Wud give $ to Halman family charity. Have 2 talk 2 team 1st

For more on the Mariners, visit Lookout Landing.