The Ducks brought some yellow back into their uniforms for the 2012 Civil War.

Share All sharing options for: Oregon vs. Oregon State: Ducks' uniforms for Civil War are awesome

The Oregon Ducks are digging into their roots for Saturday's game with Oregon State. With kickoff just a few minutes away, the UO athletic department released the uniform combination their team would be wearing. Here is Quack Cave with the photo: 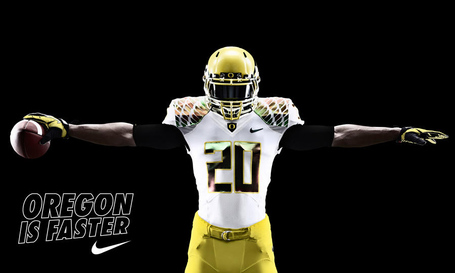 Personal opinion here, but that's one of Oregon's better combinations of the past few years. The reflective numbers are a nice touch, and the wings look great as always. Enjoy the uniforms now, though, because they're likely going to be looking like dijon mustard in a couple of hours after playing the Beavers in rainy conditions.

A lot is on the line this afternoon in Corvallis. If the Ducks win and Stanford loses, Oregon wins the Pac-12 North and will take on UCLA for a likely spot in the Rose Bowl. If UO loses or Stanford wins, Chip Kelly's crew will have to hope for an at-large bid to a BCS bowl game, with the Fiesta Bowl the most likely option.