Seahawks need the defensive backfield to stay disciplined on Sunday

Tom Brady is making his first career trip to the Clink, and he will be looking for a couple of deep strikes against a young and talented secondary.

Share All sharing options for: Seahawks need the defensive backfield to stay disciplined on Sunday

This weeks matchup isn't as much of a "must win" as it is a "man if we could get this win we'd really be set up to make the playoffs" kind of game. Winning in Carolina last week put the team at 3-2, which is about as good as we could have expected before the season started. Looking at the schedule in August, many had the Seahawks starting out with 3 wins in their first 6. If we lose Sunday against New England it certainly won't be the end of the season, if we win though, it may be what helps propel this team to heights this year only foreseen by the most optimistic of optimists.

The Patriots offense has been flying high as of late, and has all the weapons you'd need to take down even the toughest defense. Yeah, sure, the Seahawks have one of the best secondaries in the league and a run defense that just doesn't quit, but this is the Patriots, guys... Browner and Sherm are shutting down Lloyd? Welker is open. Trufant is effectively silencing Wes Welker? There is NO WAY Rob Gronkowski is covered up the seam. That guy is Calvin Johnson's brother from another mother, I swear.

Much has been made about Josh McDaniels' trip to Eugene to learn a little bit of that spread hurry up magic Chip Kelly's been enchanting everyone with at Oregon, but in my mind the Seahawks will have a much bigger hurdle to leap this weekend: play action.

If we were playing word association on a mass scale and I said "Patriots offense!", we'd hear all sorts of different words shouted, I mean, it is mass scale so obviously... there'd be a lot of answers. But I'd be willing to bet most would be the same, or at least similar.

Back when Bellichick was winning his Superbowls with the Patriots, he didn't demand as much of Tom Brady, mostly that he control the game and allow guys like Antowain Smith and Corey Dillon to carry the better part of the load in conjunction with a masterfully orchestrated defense.

That was all wiped from our collective memories though when Bill took a chance on a down and out Randy Moss. In Randy's first two seasons with Brady at the helm passing became the primary focus. This year though, the Patriots have run the ball only 6 times fewer than they have passed, and have done so very effectively. Stephen Ridley is having great success, and the Patriots are using that against their opponents week in and week out.

In week two the Cardinals were able to squeek out a win in New England by holding the scoring down and taking advantage of a few scoring opportunities. And honestly, that has been a bit of a beacon for hope for me. There is surely a blueprint somewhere in there that Pete Carroll can use to hold that same offense at bay.

What was missed though in all the praise after that game for the Cardinals defense was the opportunities they gave Tom Brady in play action. I'll show you an example here that shows why it's so difficult to cover the Patriots in play action.

This is the first play of the second quarter, the Cards have scratched and clawed to get the 6-3 lead they hold. 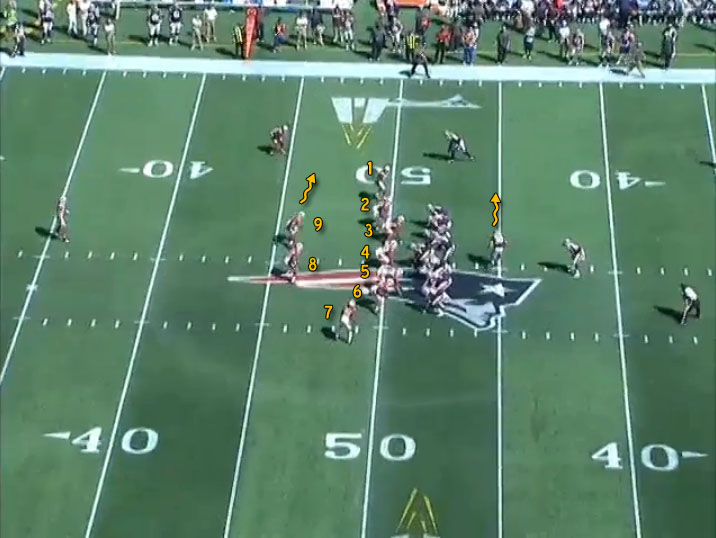 The Patriots have just run the ball off the right side on their first two plays of this possession, the first of which sprung for 20 yards. They come out in 22 personnel, (two tight ends and two running backs), the Cardinals counter by placing nine men in the box.

(While I don't think the Hawks will have to place 9 men in the box at any point on Sunday, they'll surely need to show Ridley some respect; he has looked good so far this year.) The fullback motions to the right, the defense reacts by shifting the linebackers over as well. 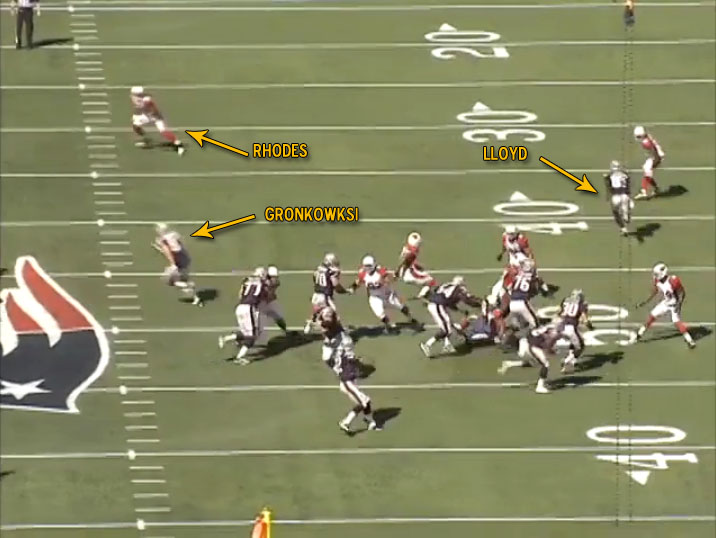 At the snap everyone but Hoomanawanui and Lloyd sell the run to the right, drawing the linebackers down into the action. The Cards linebackers and corners effectively cover their men on this play. The outside linebacker (just off screen here) picks up Gronkowski and the corner is covering the other tight end to the offense's left (also off screen).

Kerry Rhodes over reacts to the two tight-ends moving left, coming downhill hard to help cover them, and messes everything up. His bite on Gronk/Hoomanawanui leaves the middle deep part of the field wide open. The back covering Brandon Lloyd on the right side of the field is giving away inside position, which makes me think he expected help from Rhodes, the only deep safety on the play. 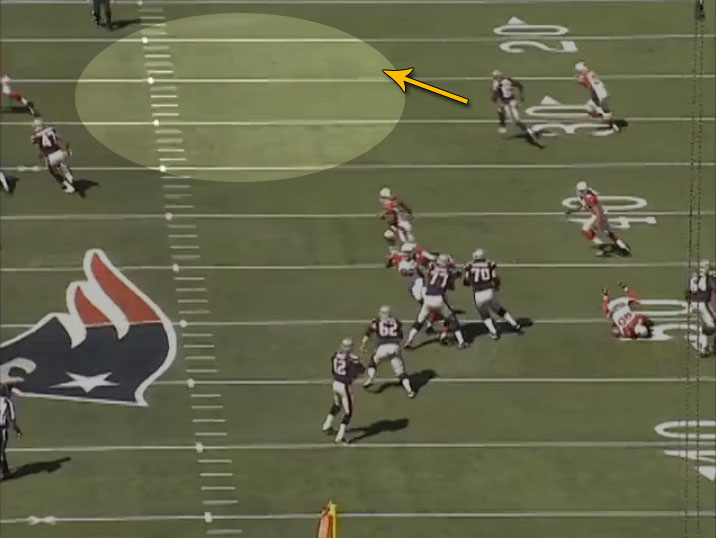 By reacting so strongly, Rhodes has opened up the entire middle of the field for Lloyd, who is running a deep post. This is both genius play design on the Patriots part, and poor play by Kerry Rhodes. It leads to an easy touchdown opportunity for Brady. 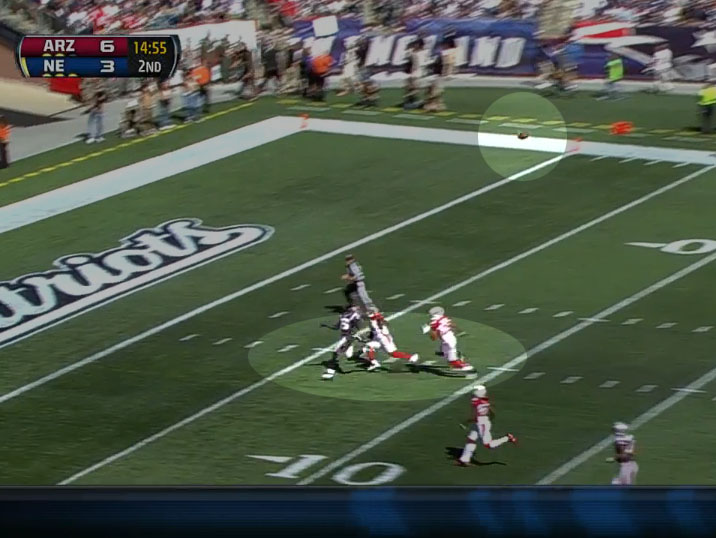 Luckily for the Cardinals, Tom Brady missed his man on the play. Brady and the Patriots offense have been on a roll since then however, and the Seahawks should not expect the same mistakes this weeekend.

Earl Thomas is undoubtedly more talented than Kerry Rhodes, but he is young and has been known to find himself out of position from time to time. He is most often able to make up for it with elite speed and quick reactions, but I have a feeling he'll need to be in top form this weekend; that will allow the Seahawks to continue to play the upfront and aggressive style of defense they love so much, without allowing any deep bombs like the should-have-been pass I outlined above.

My name is Luke. Follow me on twitter @MyHawkSoFly, satisfaction is guaranteed. Oh and let me know how you liked the markups on the photos, I'm trying out different methods to highlight elements of plays so it'd be great to find out what's working and what isn't.