The Oregon Ducks dancers enjoyed a great victory by their football team in the desert against the Arizona Wildcats, just like in 2009. But also in 2009, they had to deal with hostility from the crowd in Tucson. One dancer had to deal with the wrath of angry Arizona fans, as Katelynn Johnson was hospitalized after getting hit by a water bottle. It was an ugly incident that somewhat spoiled what had been a glorious football game between two of the best the Pac-10 had to offer.

This year, in preparation for any such ugliness, the Oregon dance team came well-equipped for any maelstrom of hatred that came hurling toward them. It never got to that as the Arizona fans had long since dispersed from the rout, but their diligence and cleverness should be rewarded here with proper recognition of their sacrifice. Oh, and we should reward our readers with visual evidence too.

Images after the jump are courtesy of Lindsay Schnell and George Schroeder. 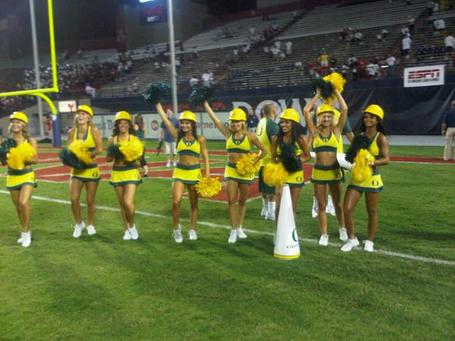 Oregon vs. Arizona: All LaMichael James, Ducks Run To 56-31 Win Over Wildcats