PHOTO: Hope Solo's Dress On Dancing With The Stars Is Not A Soccer Uniform

Share All sharing options for: PHOTO: Hope Solo's Dress On Dancing With The Stars Is Not A Soccer Uniform

Well, this is quite the change for Hope Solo. We've become accustomed to seeing the United States Women's National Team keeper in bright, long-sleeved shirts, protecting the net on the field for the USA. But now, she's traded in her cleats for heels, joining the cast of the newest Dancing With The Stars. And boy is it quite a change.

Gone are the long-sleeved shirts and uniforms. In their place, Solo has chosen attire that is a bit more provocative, though typical in ballroom dancing settings. After the jump, her outfit on Monday night. 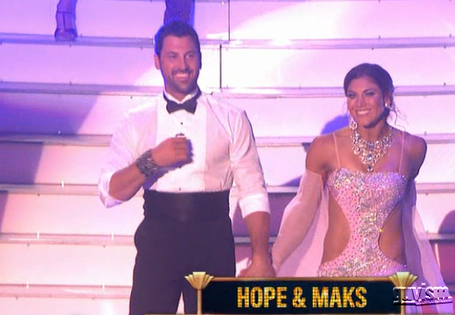 Via World of Isaac

Yep, quite the change from her on-field attire. Surely this will settle the scores of people who tweeted her asking for her hand in marriage during the 2011 Women's World Cup.

In all seriousness, it's great to see Solo on Dancing with the Stars, and she's an excellent representative of the USWNT. If it brings more attention to the sport, which is her goal, then the appearance alone will be a success. We'd love to see her win, though.