Reggie Bush Is A Fan Of Oregon's Pro Combat Uniforms

Share All sharing options for: Reggie Bush Is A Fan Of Oregon's Pro Combat Uniforms

I'm sure this won't cause an uproar or anything. Reggie Bush took to Twitter on Sunday morning to praise the uniform combinations of the Oregon Ducks, calling them the "dopest uniforms" while expressing jealousy. Remember, Bush played for Pac-10 rival USC, but didn't leave on the best terms. So I'm sure USC fans are just fine with the former Trojan giving the Ducks some love.

Bush had the tweet up for a few hours, but then decided to delete it after his words spread like wildfire. Of course. Here's the tweet, preserved by Ted Miller.

RT @reggie_bush: Oregon has dopest uniforms I'm kinda jealous! They are rockin matt black helmets right now! NFL teams don't even have that!less than a minute ago via TweetDeck

To be fair, Oregon does have some nice uniforms. With about a million different combinations, though, the Ducks are bound to stumble upon a slick looking uniform every once in a while.

If you're wondering exactly which uniform Bush was talking about, here's a photo of the helmet in question, which is part of the Ducks' newest Pro Combat set. 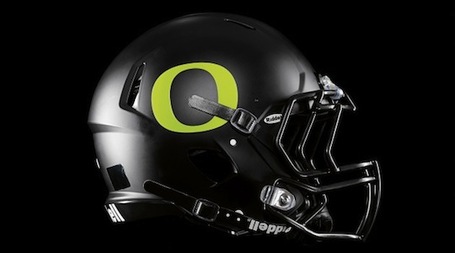 It actually is pretty cool. The Ducks' Pro Combat uniforms also feature bulletproof technology, so that's something, too. More photos and videos can be found here.

Of course, it's possible USC fans don't even care at this point. Bush left the school on bad terms and was at the center of an NCAA investigation that resulted in crippling sanctions from the NCAA. Bush ended up losing his Heisman and the Trojans were hit with a bowl ban and a loss of scholarship.