Yes, this is a real thing. The Oregon State Beavers and a team that kinda looks like the Oregon Ducks, but without some of the distinctive uniform marks and logos, are paired together on an Oregon State scratch ticket called "Civil War." There are three kinds of tickets -- one featuring an Oregon player, one with an Oregon State player and the ticket picture below, featuring both. 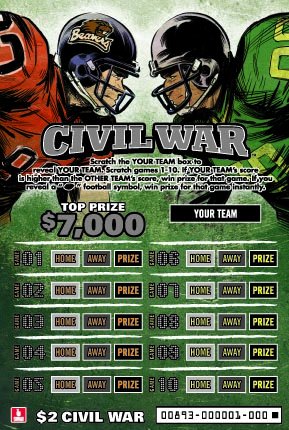 Before anyone gets all huffy, is this even a big deal? Lotteries are typically state events that pump money into state coffers. Oregon and Oregon State are both state schools, and there will be monetary benefits to the deal -- reportedly $60,000 for each side. Additionally, both Oregon and Oregon State will market the scratch tickets as part of the deal.

There is, of course, the issue of college athletics and gambling. Oregon athletic director Bob De Carolis had the following to say while addressing the issues.

"I guess we feel like we've already crossed the line a long time ago in accepting resources from the lottery," OSU athletic director Bob De Carolis said, "whether it be through this state thing, whether it's going to be on a scratch(-it) or whether it's a promotional thing. So we didn't see this being over the top."

Let's be real, though: college athletics is a big business and the illusion that all is right and pure in the amateur world is far from true. This isn't a big deal. It's not capitalizing on players' likenesses -- both players are generic -- and both universities will see a benefit from it in a time state schools are facing budget cuts all over. It's not a million dollar boost, but it's something.