You think you know a guy. He played on your team for over ten years. He was the face of the franchise. You've seen hundreds and hundreds of pictures of him and in all of them he was completely bald. It was part of his identity. It was part of his nickname -- the Bald Bomber.

Then the guy leaves and within a few weeks he's grown a bitchin' new haircut.

I'm not sure if there's a big culture change out in middle America, or if Matt is just trying to mix things up. Maybe he's found some new medical breakthrough or special treatment to regain some of what he's lost. Perhaps there's something in the water in Nashville. Perhaps he's going to try to win some of the younger Titan fan demographic or maybe his wife just got bored of the old look. I just don't know. 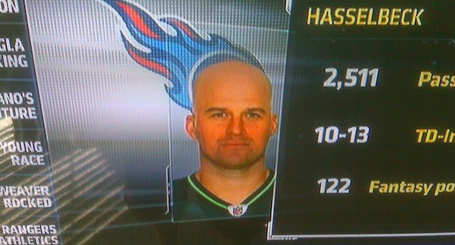 Tip of the Cap to Deadspin for uncovering Matt Hasselbeck's new coif.