Hope Solo To Appear On This Week's Sports Illustrated Cover: "Heart And Heartbreak"

Share All sharing options for: Hope Solo To Appear On This Week's Sports Illustrated Cover: "Heart And Heartbreak"

Regardless of the outcome of the Women’s World Cup Final, US Women’s National Team goalie Hope Solo was bound to garner some individual spotlight.

She took home the Golden Glove award as the tournament’s top goalie, finished third in MVP voting for the tournament, and has already been making the TV talk show rounds.

Now we can add a Sports Illustrated cover appearance to that list. 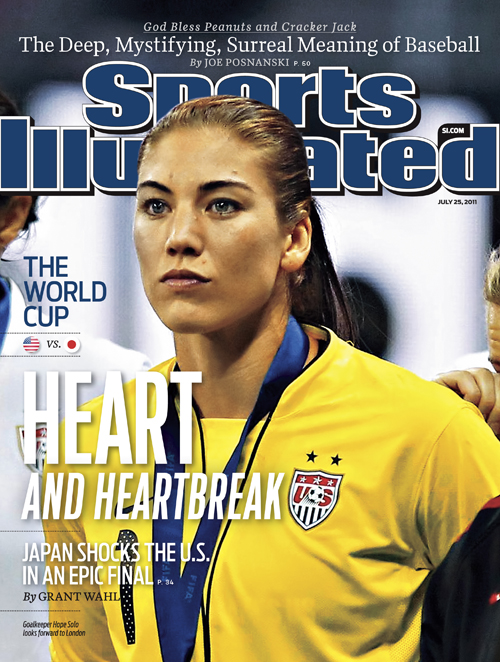 Solo is the first women’s soccer player to appear on a SI cover since Mia Hamm on the September 22, 2003 issue. However, for those wondering what the USWNT will do for the growth of women’s sports at-large, this cover might hold additional significance: over its first 60 years of existence, women had only graced the cover of four percent of SI’s covers according to Dr. Nicole M. LaVoi.

Explaining the selection of this week’s cover photo, Time Inc. Sports Group editor Terry McDonell says: "The U.S. had just lost one of the greatest games ever played, and the emotions of that are complicated. And it’s reflected in the cover shot of Hope Solo, a nuanced mix of sadness and courage. She is looking back, thinking what might have been, but she is also looking to the future."