Share All sharing options for: Hope Solo's Upper Deck Trading Card Is Disappointing In Many Ways

Hope Solo fever is sweeping the nation after the United States Women's National Team goalie introduced herself to the world on Sunday in a penalty shootout win over Brazil in the quarterfinal round of the Women's World Cup. Solo's engaging personality -- and, yes, her good looks -- made her an easy face of the team, and she's been an ambassador for the American squad since, doing interviews and talking up Wednesday's quarterfinal matchup. It's been great for Solo and great for the game.

One thing not great for Solo, and for trading card company Upper Deck, is the following card. 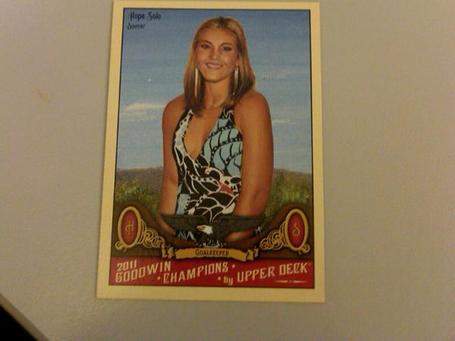 The card is, apparently, from 2011, but looks like it belongs in the early 1990s. The background has nothing to do with soccer, and is just Solo hanging out in some kind of field. And why in the world is she in a sun dress? She's an athlete, and a very good one at that.

If Upper Deck can find reasonable action shots for every other athlete in the world, why does Solo get the sun dress, middle of the field treatment? She's one of the best female athletes in the world, yet has a card that looks thrown together at the last minute, not to mention the underlying sexism claims that can be easily made.

Hopefully her performance in the 2011 Women's World Cup earns her, and the entire Women's National Team a bit more respect. Less sun dresses, more actual shots of the players in uniform. The photo below would work just fine, in fact. 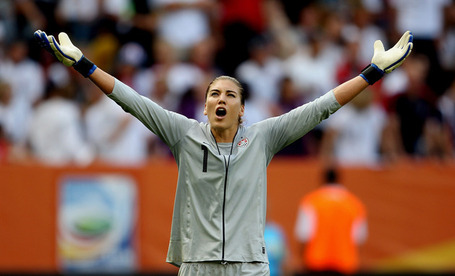