Stanley Cup Finals Tickets Will Set You Back At Least $500

Share All sharing options for: Stanley Cup Finals Tickets Will Set You Back At Least $500

What happens when your team hasn't been to the Stanley Cup finals in 16 years? Ticket prices go through the roof. According to SB Nation partner TiqIQ, the average going rate for Saturday's Game 2 between the Vancouver Canucks and the Boston Bruins is about $2,229, a 726 percent increase over the cost of regular-season tickets. But many of those tickets aren't even available.

If you really want to be there to witness Game 2, you can still find tickets for closer to $500. That's obviously still a lot of money, but at least it's in the realm of "I've wanted to see the Canucks play for the Stanley Cup my entire adult life and promised myself that if they got there I'd do anything short of mortgaging my house to get there."

It is worth noting that if the series gets to a Game 5 or beyond, tickets are already a lot more expensive. Expect to pay closer to $700 for the cheapest tickets in Game 5 and even more than that for Game 7 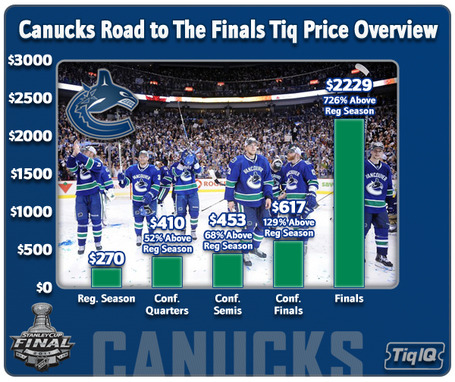