Share All sharing options for: Andres Gonzales Is Your New Favorite Golfer At The 2011 US Open

You don't know it yet, but you have a favorite golfer at the 2011 US Open. You might not even like golf and you may have never watched a minute of coverage, but I guarantee you have a favorite golfer at this weekend's tournament. You just don't know it yet, or you haven't met Andres Gonzales, the Kenny Powers of golf. And he hails from Olympia, making him an easy guy for us to root for here in Washington. 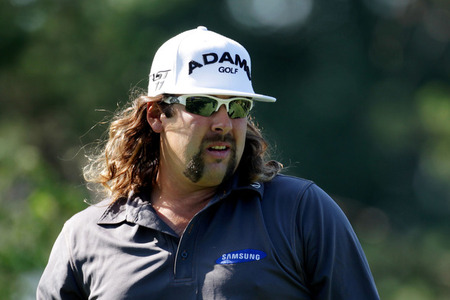 He's not your typical golfer, but it just makes it easier to fall in love. Gonzales doesn't possess the Tiger-like physic or a game that will knock your socks off. Instead, he just grinds away -- long hair, brilliant mustache and all.

Business Insider introduced the world to Gonzales this week, and noted a fun quirk of his on Twitter.

He is not a dominant golfer. He is not in peak physical condition. Has long hair and a Fu Manchu. He looks like he is always having a good time. He is (probably) joking when he refers to himself as "half man, half amazing." He knows how to market himself in this social world. And most importantly, he is likable.

Gonzales is a social butterfly, and has taken to tweeting Tiger Woods frequently. Here are a few examples.

On my way to the open. Oh @TigerWoods how I will miss you. I am going to get some ice cream tmorrow night if you want to come for a snack.

@TigerWoods qualified for the open today. Hate to say I don't need a roommate because my family is coming. But I would be up for a p. round

Hey @TigerWoods, I heard jack used to dunk basketballs. I don't buy it. Youre thoughts?

Sadly, Tiger has never responded. All Gonzales wants is a little love from his favorite golfer. But alas, he's left out in the cold, doomed to be shunned by Mr. Woods.

Gonzales is at the US Open this week, the first of his young golf career. And yes, you should be rooting for his success at Congressional. Unfortunately, his first time at the US Open is destined to be short-lived -- a first round 79 has him at 8-over and in a tie for 146th. But still, soak in the moment on Friday, then follow Gonzales' career. One day he'll be big, and may Tiger will tweet him back.