The city of Vancouver became a war-zone just minutes after the Boston Bruins handed the Canucks a Game 7 loss in the Stanley Cup Finals on Wednesday evening at Rogers Arena. In a scene reminiscent of the 1994 Stanley Cup Finals -- when fans damaged over $1 million of property in the city -- smoke was seen rising from burning cars and rubble shortly after the game concluded, and it's continued ever since. Riot police descended on the area and have been working for hours to control the situation, but at least four separate riots are ongoing, according to reports.

Before the game, over 100,000 reportedly descended on downtown Vancouver, taking to the streets to watch the game as they have throughout the Stanley Cup Finals. Public viewing areas were in place, and the crowd was well-mannered, but all that changed as soon as the Bruins finished off the Canucks with a 4-0 win.

It wasn't unexpected, and police had been bracing for the possibility of a riot knowing the large crowds could get out of hand. Liquor stores were closed early, though crowds were seen lining up outside of them as early as 11 a.m. on Wednesday morning. Stores in the downtown area also closed early as many remembered what happened in 1994 following the Canucks loss to the New York Rangers.

Even still, all the preparation in the world didn't matter. With such a large crowd, no amount of police would be able to stop the unruly masses. Cars were tipped and burned, fights broke out, and police and rioters clashed in the streets, and continue to do so hours after the game ended. Police are using tear gas, riot shields and rubber bullets to disperse the masses, but it's a long, uphill battle at this point.

As of 9:30 p.m., scattered fires were seen throughout downtown Vancouver. That includes a fire set in a parking garage, which you can see below. 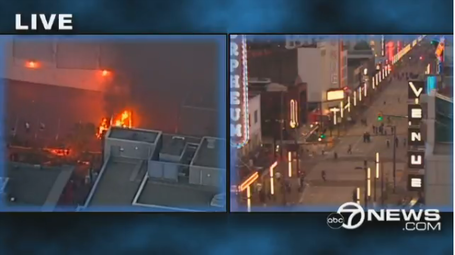 Cars were also seen burning in different areas and police vehicles drew the target of the rioters' ire. Below is a fan in a Canucks jersey stomping on two smashed police cars. 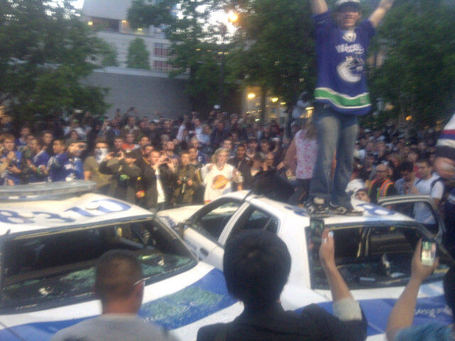 Just a short time later, cameras caught a fan posing in front of an engulfed BMW in downtown Vancouver (via WadeOn1420) 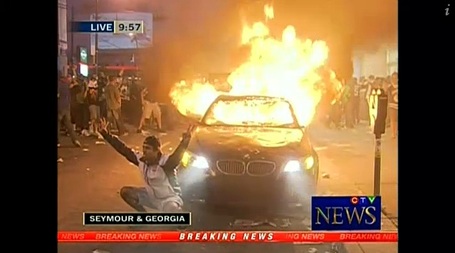 It's an ugly, shameful scene in Vancouver after a Stanley Cup Finals series that brought out the best in both cities, at least until now. Vancouver's show of support for the Canucks, including those massive crowds in the streets calmly watching the games earlier in the series, were admirable, but all that goodwill went out the window with Wednesday's riots.

You can find more photos from Vancouver here in an updated live curation tool from The Providence.