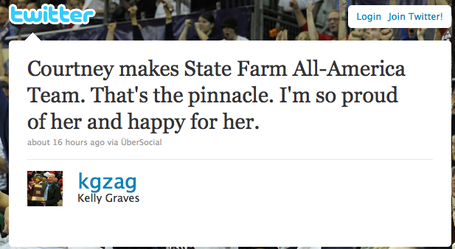 By this point, those who have witnessed Gonzaga Bulldogs point guard Courtney Vandersloot work her magic on the court this season have run out of adjectives to describe her.

So perhaps the only fresh words to use are those gained from her most recent post-season awards.

In receiving the Nancy Lieberman Award and earning recognition as a member of the State Farm All-America Team, at the very least we can say that not only is Vandersloot the best player at her position, but also among the top ten best women's college basketball players in the nation.

And perhaps even loftier claims about her standing in history can be made based on the list of awards she's already accumulated this season.

So with Vandersloot having reached the "pinnacle" of college basketball accolades, as Gonzaga coach Kelly Graves put it, the next step is where she will begin her legacy as a pro in the WNBA draft.

What's clear about Vandersloot's draft stock is that it skyrocketed with her superhuman performances in guiding Gonzaga to its first-ever Elite Eight. Seattle Storm coach Brian Agler has likened her skill set to that of his current point guard Sue Bird, who is widely considered the best point guard in the world right now.

So we know she's a hot prospect, but what's a bit murkier is just how high she will go.

Connecticut's Maya Moore will unquestionably go first in the draft to the Minnesota Lynx while Australia's 6-foot-8 Liz Cambage is likely to go second, even if the second-year Tulsa Shock franchise isn't her first-choice destination. After that, there are a number of post prospects and versatile 6'4" Stanford forward Kayla Pedersen who will definitely get ample consideration. However, as by far the best point guard prospect in this draft, it's hard to imagine Vandersloot falling past a team that deems point guard as a need and it would be almost shocking if she fell past the Indiana Fever with the ninth pick, who just lost former Seattle Storm point guard Tully Bevilaqua.

So unfortunately, it's become increasingly extremely difficult to imagine a scenario in which she falls to the Storm at the 13th pick unless someone at the top issues an executive order that it's best for the WNBA's business for her to remain in her home region. Barring that far-fetched dream for Storm fans, she'll be going elsewhere.

The Seattle Storm's own mock draft has Vandersloot going eighth to the Atlanta Dream with the Storm going for Stanford Cardinal point guard Jeanette Pohlen with their selection.

For more on Vandersloot's strengths, weaknesses, and WNBA potential with quotes from Graves and others, visit her draft capsule at SBN's women's basketball site Swish Appeal.