On Saturday, Seattle Sonics fans invaded Denver for Game 3 of the NBA playoff series between the Denver Nuggets and Oklahoma City Thunder. If you watched the ESPN broadcast, you saw Jason Reid and others in a highly-visible spot through the game: In the first row, right behind the Thunder bench. After a whirlwind trip, Reid gave SB Nation Seattle an hour of his time to discuss a variety of topics, from the trip to the NBA business model.

If you missed Reid and the Sonics fans, here's a quick look at him on the ESPN broadcast (via Instant Replay) 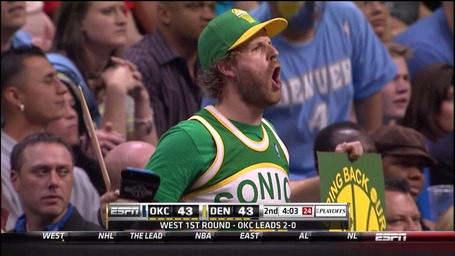 People keep asking why Sonicsgate continues to fight, three years after the Sonics shipped off to Denver. Is it jealousy,

"I remember, it was the Lakers in the playoffs, in the finals -- we were going to court everyday. One guy showed up in 94 kemp jersey and sat courtside every day. It fired me up," Reid said, taking a trip down memory lane. "We always wanted the national media to recognize what happen here and get the story told. To sort of take it to the next level, it makes the issue unavoidable. We want discussion in the open about what happened here and want the NBA back in Seattle."

The trip capped a wild few weeks, beginning with the Howard Schultz video. Sonicsgate producer Adam Brown just happened to be in the right place at the right time as he attempted to film footage for an upcoming project with Blue Scholars. The firestorm the video set off created a perfect storm as Sonicsgate found itself in headlines again, allowing the group to spread their message and remind the NBA fans are still without a team up in Seattle.

After throwing out the idea of raising money for a trip to Denver, fans responded, donating just about $3,000 to send Sonicsgate to Denver. It capped a crazy week for Sonicsgate, and put them back in the national spotlight.

"I think it's the perfect capper on the last couple weeks. A lot of times they don't allow us to use the flag. Security made us stop cowbelling, but the flag is so big and green and gold. You can't ignore it," Reid said. "If all we did is trigger some memory for them in millions of people, mission accomplished. We're here to never forget what happened and to remind people we're still up in Seattle without a basketball team."

We'll be back throughout the day with more from Reid. We discussed his feeling about the Thunder, how players felt about those crazy, green and gold wearing fans and what message the group is trying to get across. Stay with this StoryStream for more of the interview and head over to the Sonicsgate website to watch the documentary for free.