I love the idea of a military-themed spring game, with donations going to our armed forces and uniforms tailored to reflect the theme. It's something we're seeing more and more of in college football as teams support the military either in a practice setting or in games, with camouflage uniforms becoming increasingly prevalent. The Oregon Ducks are one such team and will continue the camo tradition this year, following in the footsteps of the 2010 spring game. And because Oregon is known for its outlandish football uniforms, would you expect anything else but off-the-wall apparel this year?

Of course you wouldn't. Behold, the Ducks' newest military-themed uniforms, to be worn at Oregon's nationally televised spring game. 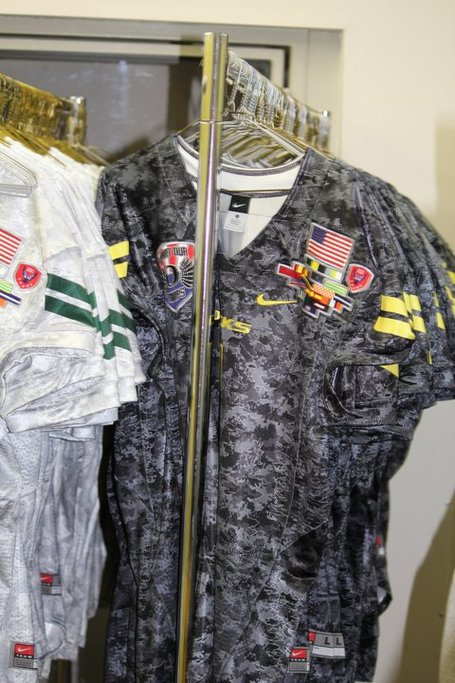 The Ducks will show off the jersey on April 30 as they take the field live on ESPN2. For as much grief as Oregon gets for its uniforms, these are kind of cool. The detail involved is outstanding, from the stripes on the shoulders to the military-looking insignia on the left breast. The camouflage is interesting, as well, and creates a nice all-around look.

You can find out more about the Ducks and their spring game over at Addicted to Quack, SB Nation's Oregon blog.