The Pac-10 Tournament is set to get underway on Wednesday at Staples Center in Los Angeles, with an automatic bid into the NCAA Tournament on the line. With Selection Sunday on the horizon, all 10 teams are battling for a spot in the postseason, with the conference race as murky as ever, even after the regular season. Arizona brought home the Pac-10 title, and No. 1 seed in the tournament, followed by UCLA and Washington. It all begins on Wednesday evening with two play-in games, featuring the Pac-10's bottom-four teams.

Schedule: The opening rounds get underway on Wednesday at 6 and 8:30 p.m. The Pac-10 Tournament runs four days, with Thursday filled with action as games start at noon, running until roughly 10:30 p.m. The semifinals tip-off on Friday before the Pac-10 automatic bid into the NCAA Tournament is handed out on Saturday.

Location: As always, the Pac-10 Tournament will be hosted by the Staples Center in Los Angeles. The location has been much maligned by fans of Pac-10 teams, with low attendance and a generally disappointing atmosphere noticeable every year.

Seeding: The Pac-10 Tournament seeds were determined by order of finish during the regular season. In the event of a tie, head-to-head record and record from the top of the conference standings down were used to decide the seeding, in that order. Arizona is No. 1, followed by UCLA, Washington, USC, California and Washington State. Oregon, Stanford, Oregon State and Arizona State must play Thursday in the opening round. 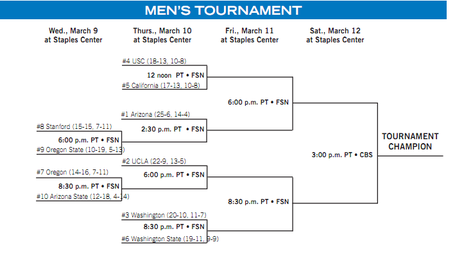 For more on the games, stay with out Pac-10 Tournament StoryStream. For more on the Huskies and Cougars, check out SB Nation's UW Dawg Pound and CougCenter.