Share All sharing options for: WIAA Boys Basketball Championship: Game Time, Teams And TV Schedule For 3A, 4A Finals

Washington state will crown its boys basketball champions on Saturday night as the 3A and 4A finals get underway at the Tacoma Dome. It's been an action-packed week at the Tacoma Dome as the girls and boys 3A and 4A tournaments have been running simultaneous in what's been heaven for hoops junkies. From upsets -- Gonzaga Prep over Garfield -- to outstanding performance's -- Tony Wroten Jr.'s excellent first-round stat line -- the tournaments haven't failed to disappoint. It all ends tonight as four teams will be bring home a state championship.

Here's all the information for tonight's 3A and 4A state championships.

TV information: Universal Sports has the 3A game at 7 p.m. FSN will broadcast the 4A game at 9:30. Ahead of those, Universal will also televise the 3A girls championship at 4 p.m., with FSN broadcasting the 4A girls title game at 5 p.m.

Teams: Lakes and Bellevue survived the 3A bracket to play for the boys title. Kamiakin and Glacier Peak are in the 3rd/5th game. On the 4A side, it's Gonzaga Prep and Curtis in the finals. Garfield took home third place, with AC Davis placing 5th. 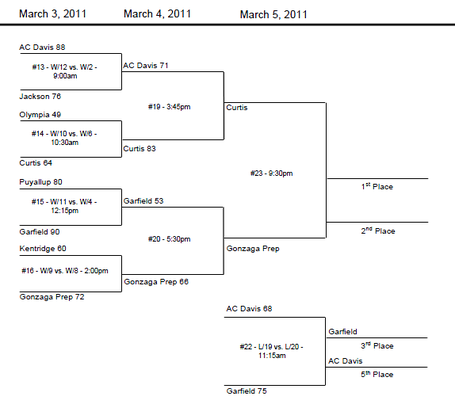 We'll be following all the action in our WIAA Boys Basketball StoryStream. Check back at 7 p.m. as the 3A boys hit the court with a state title on the line.