It's March Madness time in the state of Washington as the 4A boys basketball tournament kicks off at the Tacoma Dome. This year, the state tournament changed from year's past, with play-in games taking place across the state in the week prior to the actual tournament itself, held at its tradition location: The Tacoma Dome. The WIAA's 4A tournament features some of the top talent in the state, including Tony Wroten Jr., Gary Bell Jr., Brett Kingma, DaVonte Lacy and others.

Here's a quick overview of the tournament, including the schedule, bracket and teams involved.

Location: The Tacoma Dome, right off I-5 in the city its named after.

Teams: A.C. Davis, Jackson, Olympia, Curtis, Puyallup, Garfield, Kentridge and Gonzaga Prep made the cut and won their play-in games to make it to the "real" state tournament.

Schedule: On Thursday, the first game begins at 9 a.m., the traditional "breakfast game," with the last matchup of the day in the 4A bracket tipping-off at 2 p.m. On Friday, the semifinals are scheduled for 3:45 p.m. and 5:30 p.m. The finals begin on Saturday at 9:30 p.m. The full schedule can be found below in the bracket 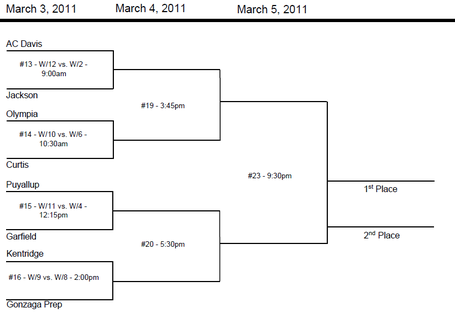 How to track the tournament: The WIAA has a live stream link set up on its tournament home page that may go live on Thursday. In addition, Mason Kelley will be live-chatting throughout the day on his blog at The Seattle Times. We'll also be keeping track of the games throughout the day in this StoryStream.

We'll be back with the 3A bracket, as well. For the latest on this weekend's state championships, stay with our High School March Madness StoryStream.