The West Coast Conference is taking over Vegas this weekend with the automatic bid to the NCAA tournament up for grabs. Gonzaga and St. Mary's shared the conference title in 2011, with the Gaels taking the No. 1 seed in the tournament. Both teams have the easiest path to the championship, sitting out the first two rounds before joining the action in the semifinals on Sunday. The action kicks off on Friday with a primetime matchup between Portland and LMU.

Here's the full schedule, bracket and vital information on the tournament.

Schedule: The action begins on Friday, with the first two games scheduled for 6 p.m. and 8:30 p.m. On Saturday, Santa Clara and San Francisco join the tournament, with game times again set for 6 p.m. and 8:30 p.m. The semifinals get started on Sunday, with two more teams -- Gonzaga and St. Marys -- joining the fun at 5 p.m. and 7:30 p.m. Finally, the championship game takes place on Monday at 6 p.m. 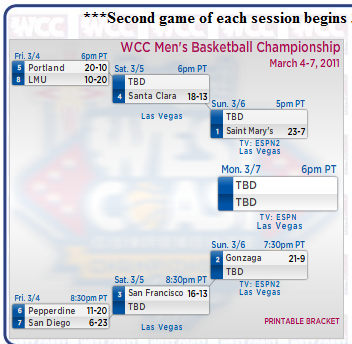