While the WIAA 4A state tournament may steal all the headlines, there's plenty of great basketball to go around this weekend at the Tacoma Dome. At the same time, in the same place, the 3A boys, and both the 3A and 4A girls, hit the court, playing for a state championship. Missing in action this year is Ranier Beach, a perennial 3A contender in the state. However, O'Dea, Bellevue, Lakes, Seattle Prep and more are in Tacoma, ready to kick off the action on Thursday afternoon.

Here's a quick overview of the tournament, including the schedule, bracket and teams involved.

Location: All 3A and 4A tournaments take place at the Tacoma Dome, sectioned off into two courts. It's the traditional setup, and hasn't changed with the different state championship format this year.

Schedule: The 3A tournament kicks off after the first round of 4A action ends on Thursday as Kamiakin and Seattle Prep get it started at 3:45 p.m. The afinal game of the day tips off at 9 p.m. On Friday, the 3A boys are at it late again, with the first of the semifinal matchups tipping off at 7:15 p.m. Saturday's championship begins at 5 p.m. 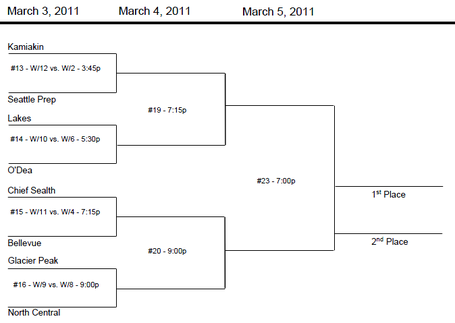 How to track the tournament: Like he will during the 4A tournament, Mason Kelley will be marathon live-chatting throughout on his blog at The Seattle Times. We'll also be keeping track of the 3A and 4A games throughout the day in this StoryStream.

For the latest on this weekend's state championships, stay with our High School March Madness StoryStream.