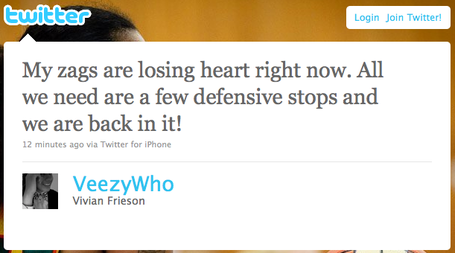 As much talent as the Stanford Cardinal have, coach Tara VanDerveer didn't simply win the Women's Basketball Coaches' Association Coach of the Year talent on the backs of her talent.

And in Stanford's 83-60 win over the Gonzaga Bulldogs in the Elite Eight, Vandersloot proved just how good a coach she is.

As they typically do, Stanford exploited Gonzaga's weaknesses in the paint and took sat in a zone to force them to take jumpers rather than allowing point guard Courtney Vandersloot to carve up their defense. After Gonzaga hung in there during the first half, Stanford's post play was simply overwhelming in the second half and while their suffocating defense held Gonzaga to 23 percent shooting from the field and helped the visitors extend their lead to over 20 points, which at least proved insurmountable if not demoralizing.

In the second half, the Cardinal got even more dominant on the offensive boards with what seems small at a 7 to 4 advantage, but ended up being a 38 percent advantage. Nneka Ogwumike led Stanford with 23 points and 12 rebounds, while sister Chiney stepped up big in the second half for a double-double as well with 18 points and 16 rebounds.

Meanwhile, Courtney Vandersloot continued her outstanding play with 25 points, nine assists, and only one turnover but outside of she and Kayla Standish, the rest of the team was held to 8-for-32 shooting.