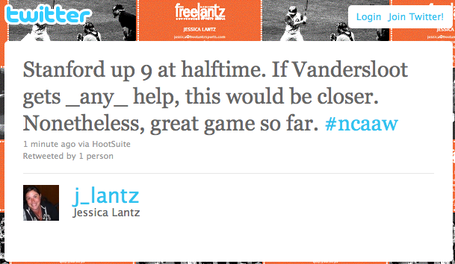 Gonzaga Bulldogs point guard Courtney Vandersloot did all she could to get her team within nine points of the top-seeded Stanford Cardinal in their Elite Eight meeting in Spokane.

Scoring 16 points in a row at one point, Vandersloot finished the half with what is now becoming a routine 21 points - including 3-for-5 3-point shooting - five assists, and one turnover.

But while some analysts have focused on the importance of point guard Jeannette Pohlen to Stanford's chances at advancing, the Cardinal are up 47-38 because of their play in the paint - although Stanford only has one more offensive rebound than Gonzaga, they have gotten 17 percent more of the available offensive rebounds in the first half on their way to a hot 62.5 percent shooting first half.

No less surprising than Vandersloot's dominant play for Gonzaga, Nneka Ogwumike leads Stanford with 15 points on 7-for-8 shooting and four rebounds while versatile forward Kayla Pedersen has a game-high five rebounds in addition to six points.

In addition to figuring out how to stop Stanford on the boards, Gonzaga will have to find someone other than Vandersloot to step up: she and forward Kayla Standish have combined for 31 of their 38 points.