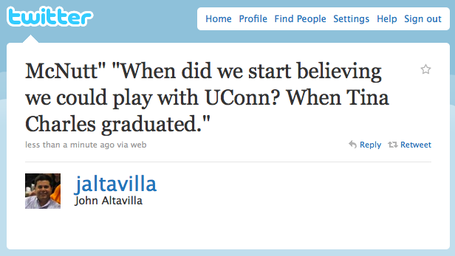 A lot has changed since the Connecticut Huskies blew out the Duke Blue Devils by 36 points on national television back in January.

And some of those changes showed up in how both teams struggled to advance for a rematch on Tuesday in the Elite Eight in the Philadelphia region.

It began this morning with the Georgetown Hoyas not getting the memo that the Philadelphia region has been widely considered the weakest bracket of the four this year. The Connecticut Huskies were supposed to cruise from Storrs through Philadelphia on their way to the Final Four and a chance to recapture championship glory for a third time in a row.

But Connecticut had to survive the Hoyas' hot first half shooting and aggressive defense to win 68-63. And as though it comes as any surprise, it was Maya Moore who stepped up down the stretch to seal the deal finishing with game-highs of 23 points and 14 rebounds after a slow start. Georgetown's athleticism and toughness were impressive throughout, particularly in how they made UConn freshman Stefanie Dolson a non-factor in the post for a Huskies team that only played six players. For Georgetown, it was an impressive outing for a program on the rise - there aren't many teams in the last three years that have come close to UConn and they can add their name to the list.

In the second game, the Duke Blue Devils came out and executed their offense as well as they had all season and used their athleticism to establish a 15-point lead over the DePaul Blue Demons during a 41-point first half. But the reason why the Blue Demons had a chance to begin with is that Duke tends to have scoring lapses and fell back to reality with 29 second half points while methodically working their offense. DePaul was within three with under a minute left after hitting big shots down the stretch, but that's when Duke star point guard Jasmine Thomas stepped up, using her speed and outstanding court sense to single-handedly break DePaul's pressure defense and carry Duke to a 70-63 victory.

Duke's defense was not up to par down the stretch, but that they had a 41-point first half against a solid DePaul team is a positive sign as they head into the Elite Eight for a rematch with UConn. However, while that first blowout was widely considered an example of Duke "not showing up" the reality is that UConn played a simply outstanding game.

UConn's Blowout Of Duke: Why McCallie's Boxing Metaphor Is Perfect - Swish Appeal
Drawing on McCallie's comment, Duke didn't get knocked out - they got hit hard and were simply stunned. They weren't able to fight back. And streak or no streak, I would argue that when UConn is playing the way they did last night, there's almost nothing an opponent can do to stop them.

For some perspective, let's talk about UConn's second half - they shot 60% from the field, 4-8 from three, had a 74% offensive rebounding percentage and 11 assists on 15 made field goals. That, by the way, was the half in which Duke played better.

UConn has not consistently played as well since that point and if Duke puts together a half-decent offensive performance, the game will be more competitive with the Final Four on the line.

Then again, after a near-loss to Georgetown, UConn could be even more motivated than they apparently were entering a mid-season non-conference game.