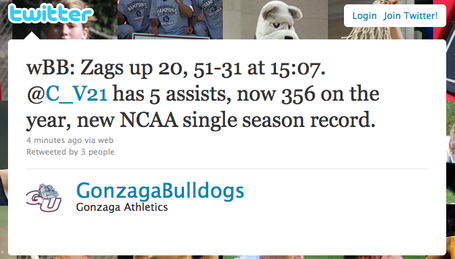 The Louisville Cardinals came to Spokane having to know that they had an uphill battle in front of them against the Gonzaga Bulldogs.

Despite a valiant effort to come back from down 20 points in the second half, Louisville fell 76-69 in the first of two games tonight at Spokane Arena for the Sweet Sixteen.

The hero of the game is probably less surprising that the outcome: Bulldogs point guard Courtney Vandersloot finished with 29 points, seven assists, and seven steals as they used their home court advantage to make a little history as a team.

Gonzaga beats Louisville 76-69 to reach Elite 8 - College Women's Basketball - Rivals.com
Gonzaga (31-4) became the lowest seed in NCAA history to reach the Elite Eight. They will play the winner of top-seeded Stanford and No. 5 seed North Carolina in the regional final on Monday night.

Meanwhile, Vandersloot made more history as an individual by setting a new single-season record for assists, which she will have a chance to add to on Monday against a Cardinal team that they've already played tough once in Spokane.