Washington State got a big win this past Sunday in the hardwood Apple Cup. After the win, thousands of students charged from the stands and celebrated with the players at center court. When all was said and done, students slowly filed out of the tunnel and media personalities statewide (especially on the west side) were angry.

When is it OK to rush the court? Who made these rules in the first place? I'll explore these topics and more. Read on. 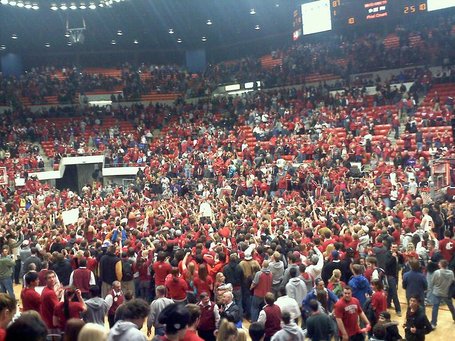 This is the first time the Cougar students have rushed the court since winning the game on one of the greatest shots I've seen in the 2008 season. When the Cougars won that game, a game that ended up taking Washington State into the postseason, Arizona State was ranked 14th in the nation.

It drives me nuts when people set rules for these kind of emotional moments in sports. People rushed the court against ASU in 2008 because it was a spectacular shot from a senior on senior night. People rushed the court on Sunday night because it was the first time in this era of Cougar basketball that their team had beaten a hated rival. I can guarantee you that when word was passed around from student to student, nobody mentioned that, "We just beat the #18 team in the nation". All that needed to be said was, "We just beat the Dawgs".

Why are people so outraged by a simple act of college students being college students? The day after the game, Mike Salk focused his show, Brock and Salk (with former Husky football player Brock Huard) on 710 ESPN Seattle, on two topics: "Did Cougar students go too far with their "No means no" chant" and "Did Cougar students go too far by rushing the court?" While, of course, they talked about the actual game, my main contention is that they gave to two other topics top billing.

Everyone who makes a point against rushing the court makes the "act like you've been there before" argument. My argument to that is simple: Why? Whatever happened to living in the moment? Yes, Washington State is just three years removed from a Husky sweep, but why should that be a factor in when we rush the court?

Screw living in the moment, let's live in the now. Let kids have their fun and stop complaining. Besides, what harm could it possibly do?