The first Pac-12 Championship game will be played this weekend at Autzen Stadium and the Oregon Ducks will be heavily favored over the UCLA Bruins. With a potential bid to the Rose Bowl on the line, one would surely think tickets would be expensive and tough to come by.

That isn't the case this year. There are still plenty of tickets remaining -- and cheap ones at that -- for the conference showdown. Heck, even tickets for the Conference USA Championship Game are going for more than the Pac-12 Championship Game. We have a graph after the jump with a look at average prices. 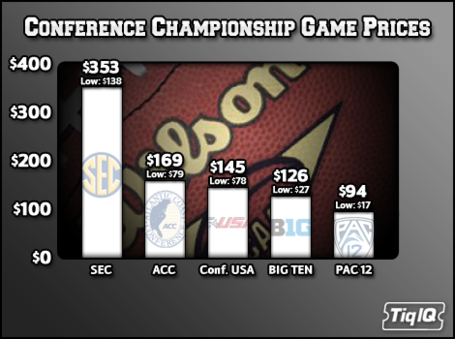 Let's all be thankful the Ducks don't play in the SEC!

With some tickets for going for a mere $20, what excuse do you have for not attending the game? Yeah, Oregon is probably going to have the game wrapped up by halftime, and yeah, it's going to be cold and rainy, but UO fans have a chance to witness history on Saturday. A chance to watch Darron Thomas and LaMichael James run the read-option one last time (in person, anyway), one last time to see the flashy home uniforms.

Autzen Stadium needs to be packed this weekend. Get your tickets while they're cheap.

For more on the Ducks, head on over to Addicted To Quack.