Washington's First Half In Photo Form

Share All sharing options for: Washington's First Half In Photo Form

Most Washington Huskies fans watching the game at home resigned to the fact that this game was headed towards a blowout once quarterback Keith Price threw an interception to Stanford's Michael Thomas that put the Cardinal up 38-14. This pick six gave the Cardinal a four possession lead and complete control of this critical Pac-12 game. 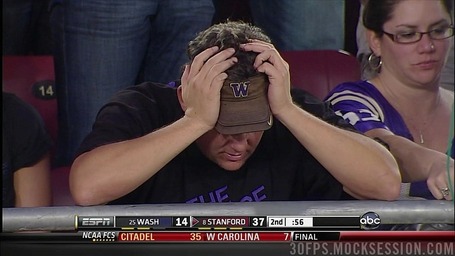 This could be a very long day for Husky fans if their team is unable to put up a fight in the second half. Optimism around this team has been high after a 5-1 start to the season, so seeing an image like this has been uncommon. This game will serve as a wake-up call to fans. It looks like Washington still has a lot to work to do before they can declare themselves a contender in the Pac-12 conference.