I understand the idea behind the basketball court at Matthew Knight Arena. Filled with symbolism, the arena is meant to be represent the Northwest, with the trees colored into the court following the motto "Deep in the Woods." It's a nice idea, but the execution of it all, as seen on FSN last night, was lacking. Between the trees that created a disorienting look for the court and the glare that was evident throughout the game, it made watching the Oregon Ducks nearly impossible on Thursday night.

Here's a photo from inside the arena from Dave Piper, of SB Nation's Addicted to Quack. 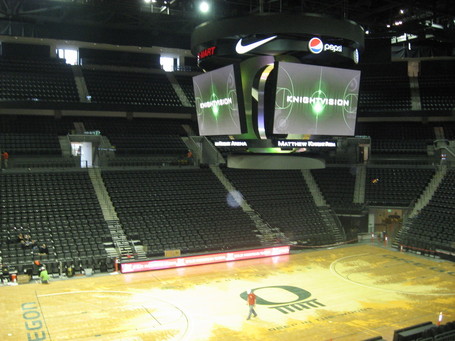 After the jump, what it looked like on the broadcast. 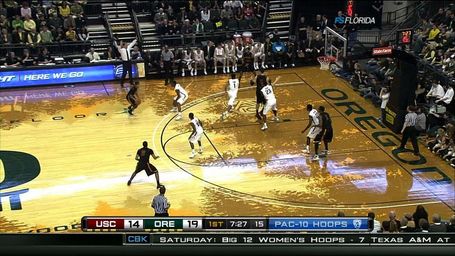 See the difference when everything is up and running? The glare, originating from the advertising ring around the arena, was so noticeable it was distracting throughout Thursday's game. The floor, and the trees that create a multi-toned look to the hardwood, creates the effect of a spotlight shining on the 'O' at midcourt, surrounded by darkness.

It's an experience to watch a game at Matt Court on TV, and not necessarily a good one. I love the arena itself, and it's beautiful, but that court is going to take some getting used to. Even then, I'm not sure I'll ever be able to adjust to seeing such a radically different court.