Michael Dyer Tackled, Or Not, In BCS Championship Game

Share All sharing options for: Michael Dyer Tackled, Or Not, In BCS Championship Game

The BCS Championship came down to Auburn freshman Michael Dyer and a tackle that, apparently, wasn't. Dyer tackled, stayed on top of the Oregon defender, got up and took off down the field. The rule, of course, is that the player is not down until the knee touches. Dyer stayed on top of Eddie Pleasant, appeared to think he was down and then took off. It was one of the most bizarre plays I've seen.

After the jump, an enlarged version of the moment he hits the ground. If he's down, Oregon would've had a fighting chance. 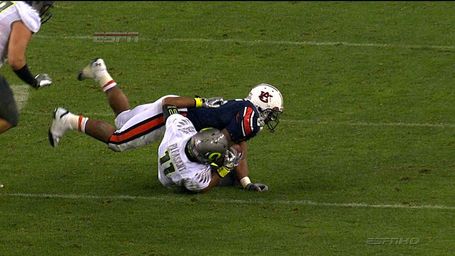 Either way, it's a damn shame the BCS Championship came down to this. Pleasant's tackle was just that -- a tackle, in every sense of the word. But, because of a fluke roll, it didn't count and Auburn benefited in the biggest way.

SB Nation Atlanta has the video, in full-speed, and an the interpretation of the rulebook. Check them out, and see if you can decided whether the play stands.