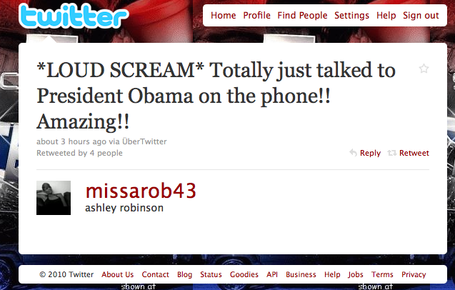 From a White House Office of the Press Secretary:

Earlier today, President Obama called members of the Seattle Storm organization, to congratulate them on winning the WNBA Finals for the second time, on their success during the regular season and their undefeated run in the playoffs. The President told them that they are an inspiration to everyone, especially his daughters. Members of the Storm organization on the call told the President that they appreciated his call and that it was a highlight for their organization. President Obama said he looks forward to congratulating them in person at the White House.

Again, big congratulations to the Storm.