Tuiasosopo Focused On Positives Despite Mariners 'Just Not Playing Well'

Share All sharing options for: Tuiasosopo Focused On Positives Despite Mariners 'Just Not Playing Well'

In his game thoughts on Saturday, Jeff Sullivan of SBN's Lookout Landing wondered about the Seattle Mariners' clubhouse morale.

48-73, Game Thought - Lookout Landing
The frustration of a disappointing year made up of a lot of disappointing individual seasons boiled over on a handful of occasions, and there was little in the way of respect being shown to the manager. About a month ago, if you'd have asked me which clubhouse had the most negative morale in the league, I probably would've picked out the Mariners.

But now? Now I wonder.

As it happens, I had a chance to speak briefly with Mariner Matt Tuiasosopo last Tuesday when he participated in the Seattle Storm's WNBA Fit Clinic at KeyArena along along with Brian Sweeney, Boston Celtics guard Nate Robinson, the Storm's starters, and others. In what began as a discussion about the value of youth staying fit, Tuiasosopo seemed to add some weight to Sullivan's speculative sentiment while discussing what it means to fight through adversity. 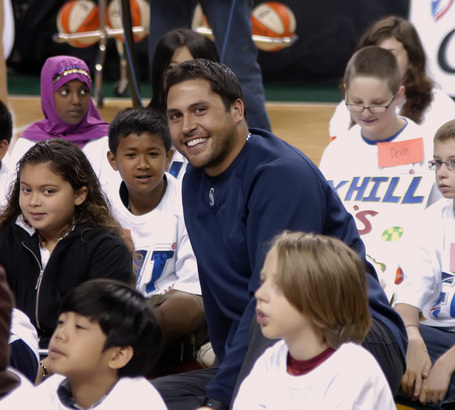 "It's been a tough one for us," said Tuiasosopo. "We've been through a lot of stuff and obviously just not playing well. And no matter what you've still gotta persevere. It's easy when things are going well - when everything is going well, it's easy. But you really find a lot about people and teams when they face adversity and how they deal with it.

Obviously, one way the Mariners have dealt with adversity this season is by making numerous changes. However, as Sullivan suggested in his piece, perhaps that has given the team a fresh start and led to better morale even if the losses still feel daunting.

"That's something that I've seen us do at the Mariners - it's been a tough year, but I think in the second half we've played a lot better," Tuiasosopo continued. "We might not be winning a lot of ball games but there's a lot going on that is positive and that we can take into the off-season. It's about staying the same no matter what and always believing in yourself and your ability and each other and never losing that belief no matter what you face and just persevering through it."

Looking ahead to next season, Tuiasosopo himself has shown some potential to develop and his power hitting might be one thing the Mariners can build upon, as Sullivan described in his piece outlining nine things that seem better than they are on account of how bad the Seattle Mariners are.

Things That Seem Better Than They Are On Account Of How Bad This Team Is - Lookout Landing
Young power. Michael Saunders, Matt Tuiasosopo, Adam Moore, and Justin Smoak have combined for 18 home runs over 650 trips to the plate, which isn't bad for a group of guys with little experience. On the other hand, Michael Stanton has 20 home runs in half the time. Logan Morrison has a .910 OPS. Some guy named Neil Walker is batting .300 with Pittsburgh. It would be neat if our four guys could hit better than a combined .190.

At the very least, we can say that after being an historically bad offensive team in 2010, the Seattle Mariners can go nowhere but up next season. More optimistically, we can read Tuiasosopo's comments as validation of Sullivan's most positive thinking.

Yet needless to say, the Mariners will have some work to do and Tuiasosopo's positive outlook on things certainly won't hurt. The question, I suppose, is whether Tuiasosopo is seeing positives now on account of how bad this team has been or whether there is some substance within that positivity that the Mariners can actually build on.

For more thoughts on the WNBA Fit Clinic from Robinson and Tuiasosopo, visit SBN's Swish Appeal.