Photo Sequence & Video: Was Sue Bird's Shot The Result Of A Great Or Moving Screen?

Share All sharing options for: Photo Sequence & Video: Was Sue Bird's Shot The Result Of A Great Or Moving Screen?

Sue Bird hitting a game-winning shot in Game One of the WNBA Finals (photo by Kailas Images).

For some reason after the Seattle Storm's 79-77 win in Game One of the WNBA Finals, I had this vague recollection immediately after the game of Atlanta Dream guard Iziane Castro Marques guarding Sue Bird on her game-winning.

Upon looking at the replay, it was obvious wing Armintie Price was indeed the player guarding Bird on the play. But perhaps the above photo sequence will help you understand why my memory was flawed -- Price simply disappeared from the entire scene somewhere in between frames one and two.

That intermediary frame isn't omitted intentionally -- it was just a moment the photographer missed. But what happened in those intervening moments has been the subject of some light discussion among fans and members of each team.

The Dream had been going under screens all game to follow the screener, but you'll notice here that Price was completely engulfed by Jackson to the extent that she was taken completely out of the frame by the time Bird took her shot, as seen below when Bird is already in her shooting rhythm. 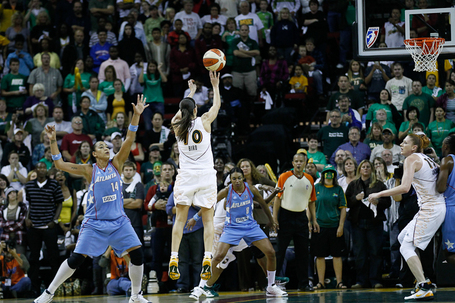 Some might call it a great screen by Jackson.

"On that screen, she just did a great job," said Bird. "People were like, 'Oh, it's a moving screen!' They went under -- that's the gamble of going under. But Lauren didn't roll she just kind of turned. So it worked out and it worked out for the best."

And as Bird alluded to, others might call it a moving screen that had less to do with their strategy.

"Well in defense of that play, in my opinion, it was a rolling screen and a wrap, and I won't say anymore beyond that," said Dream coach Marynell Meadors. "But it worked so maybe we tried."

Obviously, given that the point of contention is motion, having that additional still frame image wouldn't help a whole lot. So take a look at the highlight video and judge for yourself (the relevant sequence begins at the 15 second mark).

For more on Game 1, see the summary at SBN's Swish Appeal: Little Things Mean A Lot: How Unsung Heroes Stepped Up in Game 1