Why Lauren Jackson Deserved At Least One DPOY Vote

Share All sharing options for: Why Lauren Jackson Deserved At Least One DPOY Vote

That Lauren Jackson and Tanisha Wright earned 2010 WNBA All-Defensive Team honors is certainly a testament to the strength of the Seattle Storm's defense as a whole.

However, seeing Jackson on the second team is mildly surprising, if ultimately justifiable - the voting is by position and Chicago Sky center Sylvia Fowles is quite a force defensively. At the forward position, Indiana Fever forward Tamika Catchings was also named Defensive Player of the Year and Atlanta Dream forward Angel McCoughtry is one of the most athletic perimeter defenders in the league.

Yet despite the qualifications of the other players, something initially felt strange about the combination of Jackson neither making the First Team nor even receiving a vote for Defensive Player of the Year. 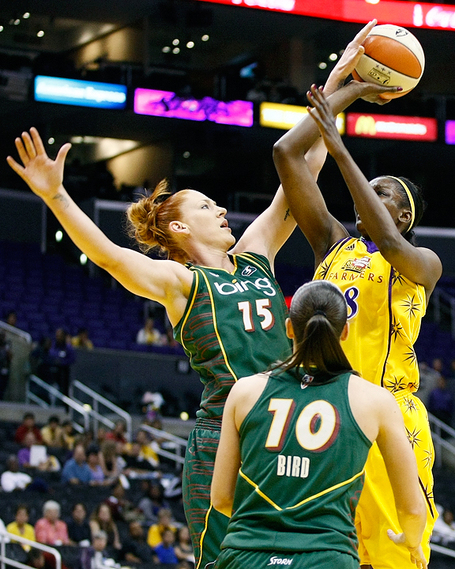 Just to get this out of the way, the response from most WNBA observers to the 2010 WNBA All-Defensive teams as a whole could be described as perplexing, if we're feeling charitable today.

But to be fair, defensive selections are difficult.

For other awards, voters can rely on statistics to make half-reasonable decisions. However, it's no secret that since basketball statistics don't tell the story of individual defense very well, selecting an All-Defensive team is something of a difficult task for voters (coaches) who see players in their own conference the most.

So realistically, unless you have the ability to watch film of all players at various positions guarding similar players - taking into account the team's defensive schemes and how well a given player performed their role - making any sort of statement about the league's best defenders is bound to be somewhat arbitrary. Even then, voting by "position" is somewhat awkward - guarding a lead ball handler, a perimeter player, and an interior player are tasks that aren't always neatly defined by "position", especially in the WNBA where 6'4" Phoenix Mercury forward DeWanna Bonner can be seen picking up point guards full court.

In their inherent arbitrariness, we can probably say that reputation probably matters for defensive awards than other. So what does it mean for Jackson's defensive reputation that she didn't even receive one vote for the Defensive Player of the Year award?

Of course, you could dismiss the whole thing as meaningless if the premise is that they're arbitrary, but I did find accounts of Jackson the defender from after Game 1 of the Western Conference semifinals that the Storm just won interesting.

WNBA Playoffs: Defensive ploys could lift Los Angeles Sparks in Game 2 vs. Seattle Storm - ESPN Los Angeles
For as great as Seattle's Lauren Jackson is offensively, she lacks the lateral movement to stay in front of people defensively after the multiple injuries she's suffered. If the Sparks can create the space required for Thompson and Milton-Jones to operate, facing up and attacking Jackson off the dribble could be a very effective plan of attack. By going right at Jackson, there's a chance she'll pick up some fouls compensating for her lack of foot speed.

Contrast it to another Game 1 account from an astute basketball observer.

The Works: Lauren Jackson and the Wild, Weird WNBA -- NBA FanHouse
While the WNBA's best pivot isn't a perimeter player, Jackson certainly roams freely, working her way in and out of the lane to either find the right spot to post or fire away from long-range. This same approach holds on defense, where she'll alter a shot down low, only to leap out to pick up a guard who has found some open space. Ever seen a center get beat after trying to make a help steal on a point guard at the top of the key? I have with Lauren Jackson. And the scary thing is, she usually pulls it off.

There are two major similarities in these observations that merit consideration because they aren't necessarily contradictory. First, when Jackson is defending players on the perimeter, "there's a chance" that she'll get burned. But second, and more importantly, it's not at all uncommon for this 6'5" center to step out and guard people on the perimeter, even if we grant the assumption that she's lost a step.

Whether you take the "chance" of her getting beat as a positive or negative here isn't necessarily the point; the point is that the fact that she does it is neither out of the ordinary nor leaving the Storm in a vulnerable position.

This is just what Jackson does.

Most importantly, while we can debate whether decorated Olympians like veterans Tina Thompson or DeLisha Milton-Jones give Jackson problems on the perimeter, there's no point even entertaining a debate about how a more average perimeter player feels about seeing Jackson in front of them on a switch or pick-and-roll situation. More often than not, the result is something along the lines of dribble-dribble-pass. And unless something has changed drastically since mid-season, Storm coach Brian Agler is perfectly comfortable with Jackson's defense, even in situations where she has to step out on the perimeter because smaller players -- like Catchings -- are matched up with her.

Learning to appreciate why Lauren Jackson is "the best basketball player in the world" - SB Nation Seattle
"Lauren's going to be the MVP of this league and the reason is she can defend," said Agler after the Storm beat the Indiana Fever, reigning Eastern Conference champions, last week. "There's gonna be a lot of people with numbers in this league, but there's no one that can do both like her."

The point of all of this is that what had Jackson in conversations about the Defensive Player of the Year all season is that she is not only the "anchor on the inside" for one of the best defensive teams in the league, but she is also quite capable of having an impact all over the court, whether that be chasing people down on fast breaks or switching out on perimeter players. She's as imposing a defensive force as anyone in the league because she can defend all over the court. The thought of a center doing that is simply unheard of in basketball, as Bethlehem Shoals alluded to.

Ultimately, it's not that Jackson or anybody in the Storm locker room will be upset about not getting a DPOY vote - my guess based on hearing her discuss any other recognition she's gotten is that she really doesn't care that much one way or the other. But given that two other centers got votes without having quite the defensive seasons as Jackson, the "slight" does illustrate how difficult it is to evaluate a player's defensive impact even when that impact is a large part of what makes said player a frontrunner for the Most Valuable Player award.

For more on the Storm's All-Defensive Team honorees, check out StormBasketball.com.

The Storm will be continuing their quest for a WNBA title on Thursday in Game 1 of the Western Conference Finals at KeyArena. Players like Jackson are one of the reasons to come out and see them play: Five Reasons Why Now Is The Time To Give The Seattle Storm A Chance.