There's more to practice than watching players. It's a chance to be surrounded by the purest strain of 12th Man.

This is a collection of notes from camp that are neither about player performance nor the coach's schemes.

"Ndamokung Suh had more sacks than Alabama and Florida combined."

Quoted from a twenty-something guy that spent much of practice spouting these kinds of factoids. Suh had 12 sacks. Alabama: 32 Florida: 39

"Rule number one: Do not be too loyal to your favorite team."

The above person's father. The line produced an audible gasp from a diehard Seahawks sitting in the row in front of me.

A fan first learning that J.P. Losman is the Seahawks backup quarterback. His sentiment may soon be shared.

A wife attempting to explain who Mike Williams is to her confused husband.

A flash of recognition strikes the faithful.

A fan commenting on me.

A Running Tally of Player Jerseys Worn by Fans 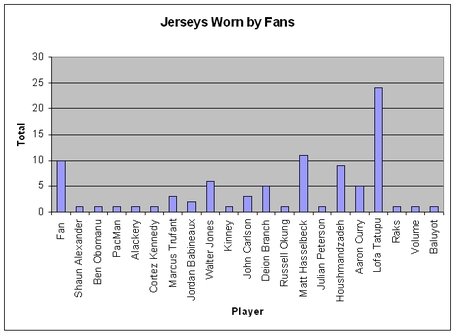