Decked out in Seattle Sonics gear, Philadelphia Sixers center Spencer Hawes was among the most engaged NBA players at the tournament not only representing his school in the 3-point contest, but also warming up for the contest with a group of kids and participating in a friendly (and seemingly corrupt) game of knockout with fans and coaches.

For Hawes, whose alma mater Seattle Prep is a first time participant in the tournament, the game is a chance to maintain the basketball culture that took a big hit with the loss of the Sonics.

"This is great -- I wish I had been able to play yesterday," said Hawes, referring to the fact that he did not play in Seattle Prep's game yesterday. "But it's a lot of fun to see so many familiar faces from growing up playing in this area, so many guys I've known throughout the years, all coming together and trying to put on a show for the community and the kids -- that's what it's really about. These kids got their team robbed, and so for the guys from around here, to give them a little taste of basketball and coming out and seeing guys like Jamal (Crawford) and Terrence (Williams) and everybody playing yesterday -- Tre (Simmons) and Will (Conroy) and all those guys -- it's fun, it's fun to see and as a fan it's a good environment." 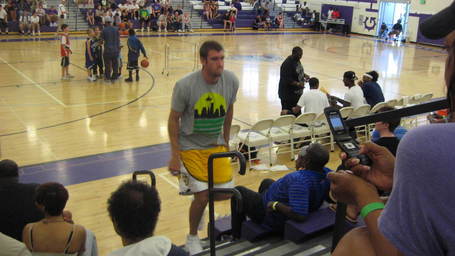 Hawes in his Sonics outfit.