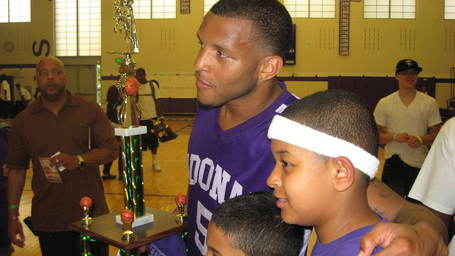 Will Conroy takes a picture with young Seattle fans.

To truly appreciate the Adonai Hood Classic, you probably need to free yourself from rigid expectations of players surrendering themselves to the team concept or expecting coaches to bark out elaborate offensive sets.

Every moment of the event — from the three-point contest to the dunk contest to the games themselves — is about bragging rights. Winning and losing matter only to the extent that they elevate one’s own legacy.

"In the hood you gotta make a name for yourself," said the MC while making fun of eventual three point champion Morris Anderson about being from Federal Way, a city along the highway between Seattle and Tacoma.

In basketball terms, that means players are more often looking to pull off a one-on-one play to show up their opponents to please the crowd than adhering to the basic principles that might please purists. While it can degenerate into sloppy play at times, the aggression and intensity from the players also creates a vibrant atmosphere that can bring almost anyone back to the days when all that mattered was beating your cross-town rival.

This weekend, the player who best embodied that spirit among a talented field of competition was Will Conroy.

Conroy scored 24 in the 4th quarter to lead Garfield to a 110-105 victory over Terrence Williams’ Rainier Beach squad, defeating the tournament’s reigning championship. In a game defined by the play of its most talented stars, it was Conroy’s relentless drives to the basket that ended up leading to victory. Although a significant portion of those 24 points were free throws, high man and a championship are certainly enough to take home the bragging rights.

Conroy suggested that those bragging rights are not only about the community of faithful supporters looking on from the bleachers in the renovated gym of his alma mater, but also the growing community of NBA players from the Seattle area.

"It means a lot," said Conroy, who finished with 34 points for the game. "The trophy, not so much. But winning the game is more important because a lot of us are very close knit. We’re kinda putting Seattle on the map as far as basketball. So throughout the season, all of us are keeping track of each other and supporting one another. So when we get back into stuff like this it’s one of the few times that we compete…so this kinda means something."

Looking at Will Conroy’s basketball resume, it might not be immediately obvious why the "2010 Adonai Hood Classic Tournament Champion" item would mean anything at all.

He left the University of Washington in 2005 as the school’s all-time career assists leader (505). Along with Portland Trail Blazers star Brandon Roy, he helped lead UW to its first ever #1 seed in the 2005 NCAA men’s basketball tournament. After bouncing in and out of the NBA over the last few years, he was called up from the NBA D-League to play for the Houston Rockets briefly in March and has been invited to participate in their training camp later this fall. However, the Hood Classic is something far more personal for the players involved.

"You see how much it means to everybody," said Rainier Beach alum and NBA free agent Nate Robinson, who played in the NBA Finals for the Boston Celtics and judged the dunk contest but did not play in the championship game. "This is our championship game. This is our Finals. It’s basically like hood bragging rights and everything so we take this serious."

Things got serious enough for referees to call a technical foul and an extended delay in the second quarter after a hard foul from Garfield’s Tre Simmons. However, after each incident it was as though the intensity was taken up another notch or two, both further engaging the crowd and reinforcing the players’ desire to pull off highlight reel plays.

Once again, Terrence Williams was arguably the most impressive player despite losing scoring a game-high 41 points and once again raining threes on his opponents. Roderick Stewart scored 21 for Rainier Beach, similarly making his name from the three point line.

However, it was the aggression of Conroy plus the steady play of Tre Simmons that ultimately won the game for Garfield. Simmons finished with 31 points and just seemed to be in the right place at the time on offense, cutting to the basket for layups, taking advantage of overplaying defenders with baseline drives for reverse layups, and hitting a few threes of his own. Yet what stood out most was his defense early on of Williams, a 2009 NBA lottery pick who had a solid rookie campaign including eight triple doubles.

Simmons shut down Williams early on as Garfield jumped out to a 17-8 lead, forcing him into contested fall away jumpers and denying penetration. After that, Williams and Stewart helped rally Rainier Beach back to a 49-49 tie at halftime. The continued to go back and forth with Rainier Beach leading by as many as 9 points over the hosts late in the third before Conroy took over in the fourth.

Yet even in a game that quickly became a showcase of individual talents, what makes it fun for players and fans alike is seeing players like Conroy and Simmons go toe to toe with a nationally recognized player like Williams and actually come away with the bragging rights. Even for players like Robinson or Jamal Crawford who did not play, the tournament

"It’s just a lot of fun," said Jamal Crawford, 2010 NBA Sixth Man of the Year who experienced the NBA Playoffs for the first time in his 10-year career this season for the Atlanta Hawks. "People here are going to go against you, root against and nobody’s backing down. Everybody has a lot of pride to go to your school. So it’s a lot of fun to be a part of."

That’s something that anyone who has ever played basketball can relate to, even if our careers ended when we left high school.

For more on the game, see Ron Newberry's recap at the Seattle Times.