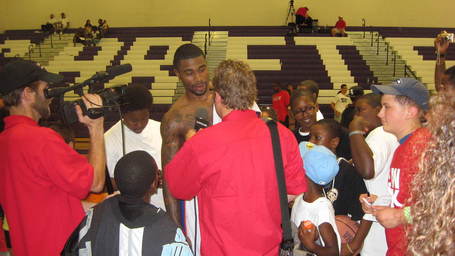 It might be reasonable to assume that with Minnesota Timberwolves wing Martell Webster absent and Philadelphia 76ers center Spencer Hawes cheering his team from the bench, Seattle Prep would have no chance against Rainier Beach.

Even without Nate Robinson — pound-for-pound one of the NBA’s biggest personalities — Beach featured 2010 NBA Sixth Man of the Year Jamal Crawford and April 2010 Rookie of the Month Terrence Williams. Yet Seattle Prep seemed to catch Beach off guard a little with the game actually teetering on the edge of a blowout for long stretches of time.

Then with under three minutes left in the third quarter, Williams caught fire from the three point line and led Rainer Beach to a come from behind 88-81 victory.

In his first NBA season, Williams shot 31% from the three point line. It doesn’t really matter what percentage he shot from the high school line against Prep. What matters is that they just kept going in after he got hot. With Beach having already cut the lead to six, Williams hit three consecutive threes within 50 seconds of game time from all around the arc to tie the game at 59 with 1:51 left, earning increasingly louder support from the Garfield crowd.

Williams was just toying with players, stepping back, throwing pump fakes to watch defenders go by, and waiting for people to step up before he shot it. Seattle Prep’s Jeffrey Day (University of Washington/Creighton University ‘06) tried to keep his team in the game with similarly hot shooting — at one point the MC behind the DJ table announced that Day had hit 8 threes — but Williams just wouldn’t let up. In the final minute of the third, Williams hit two threes while Day hit one and the fourth quarter began with Beach up two on their way to a rout.

In the fourth we got to see a little fun from Rainier Beach — Crawford dribbling the ball up the court backwards between his legs and Williams with a powerful tomahawk dunk.

In addition to Rainier Beach’s showdown with Garfield in tomorrow’s championship game (5 pm), these two schools are scheduled for more fun tomorrow. After doing a little coaching and handing out Gatorade from the bench today, Hawes is expected to compete in the three point contest while reigning Hood Classic three point contest champion Nate Robinson is expected to show up as well to compete tomorrow.

Doors open at 4 pm tomorrow for the dunk contest and three point shootout.

Video: Spencer Hawes still coaching with under a minute left.