Trying to understand what makes so many people consider Seattle Storm forward Lauren Jackson to be the best women's basketball player in the world is difficult to imagine for most basketball fans and even more difficult to put into words. Even those who see her game regularly struggle to find a way to describe her...or contain her.

Share All sharing options for: Learning To Appreciate Why Lauren Jackson Is 'The Best Basketball Player In The World'

While Seattle Storm point guard Sue Bird is arguably one of the most recognizable female athletes in the world, teammate Lauren Jackson often draws the distinction as best women's basketball player in the world.

Prior to the San Antonio Silver Stars' 86-72 loss to the Seattle Storm last night, coach Sandy Brondello wasn't even exactly sure how one might stop a player like Jackson, whom she had coached against twice already this season and known even longer.

"Stop her? That's a good question," said Brondello half-jokingly while sitting next to Jackson, her friend, former teammate, and fellow Australian. "I don't want to let you in on all of our little secrets. I don't know: can you totally stop Lauren Jackson? That's the big key."

"You can," chimed in Jackson, dismissing the high praise as always. "You've done it before."

"We just hope she has a bad night," said Brondello, ignoring Jackson's protestations. "But we'll try and throw some different looks at her and see how she comes up."

"It's not even like that," replied Jackson, shaking her head.

Then they just looked at each other and shared a laugh. And appropriately so: despite Jackson's claims to the contrary, Brondello's accounts are far more believable than Jackson..

"Go easy on us," quipped Brondello, while giving Jackson a hug before they parted ways to join their respective teams. "It's a challenge for us. Now we can get back to seriousness."

Apparently Jackson missed the "go easy" part during the hug and heard the getting back to seriousness part quite clearly as she walked away. Once she took the court, she pretty much proved that Brondello's high praise was more than just a few kind words from a friend.

Jackson came up huge with 31 points on 11-20 shooting and 15 rebounds in 32 minutes, one point short of tying her season-high and demonstrating why opponents' best bet is to simply hope she comes up with a bad game along the way.

Yet those numbers are probably only a small slice of just how much Jackson can actually do. As usual, she scored in every way possible: post-ups, cuts to the basket, put backs, turn-around fade away jump shots, three point plays and three point shots (she ranks 4th in the league in three point shots and attempts). At some point there's nothing you can do but sit back in your seat and just shake your head while watching a 6'5" post player dominate the game from every area of the court.

"This is one of those nights she could have really put some huge numbers up if she would've got the minutes," said Storm coach Brian Agler after the win. "But we got to the point where we wanted to play some other people and she was really energized tonight. She took advantage of these last couple days and got some rest."

Yeah -- those 22 point fourth quarter leads always seem to get in the way of a player putting up bigger numbers.

But it wasn't exactly different in the Storm's first two meetings against the Silver Stars. In the first meeting in San Antonio, Jackson helped make short work of the Silver Stars, recording 27 points in 28 minutes in a 84-56 blowout. In their June 20th meeting, she dropped a relatively pedestrian 19 points and 14 rebounds in a 82-61 result.

Looking more closely at Jackson's rebounding last night only reinforces how difficult she is to stop -- her six offensive rebounds came after the Silver Stars spent the last few days of practice on blocking out and defensive schemes specifically to finish off plays and keep Jackson off the boards. They like other WNBA teams -- simply haven't found an answer for stopping Jackson or the Storm.

"She’s the best player in the world," said Brondello after last night's loss. "She’s amazing and she gets better and better. She’s just a hard guard for us. We wanted to do some things differently, but really didn’t ever get that done. Sometimes you think Lauren might score, but you have to limit the other ones. Then you have five players in double figures and that hurts us. They’re a well coached basketball team and they’re hungry and it shows."

We could certainly dismiss this entire Jackson dominates the Silver Stars narrative as a matchup problem or the fact that by their own admission the Silver Stars don't have the athleticism to defend Jackson one-on-one or the personnel to stop everybody else if they focus all of their attention on Jackson. That all sounds reasonable until considering that Jackson is averaging 21.4 points per game (2nd in the WNBA), 9.1 rebounds per game, shoots 37.2% from the three point line, and 91.2% from the free throw line. Combined with her career-high 3.2 offensive rebounds per game, how exactly does a team stop Jackson?

Stick a smaller player on her to keep up with her on the perimeter and she'll go inside. Force other players to miss shots and she'll get the offensive rebound and a second chance shot opportunity. Foul her and she'll hit 9 of 10 free throws. Which comes full circle to sticking a bigger player on her who she'll just abuse from the perimeter. On top of all that, either masking her impact or making it more painful for opponents, Jackson seems to do everything with relative ease...when she isn't drawing fouls for three point plays.

And that's just on the offensive side of the floor -- people sometimes forget that Jackson was also 2007 WNBA Defensive Player of the Year. 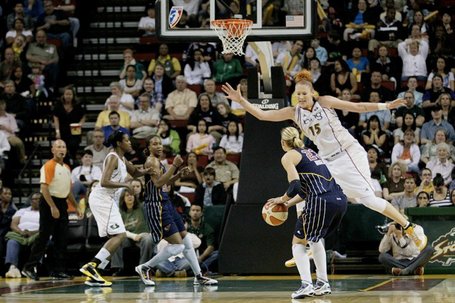 "Lauren's going to be the MVP of this league and the reason is she can defend," said Agler after the Storm beat the Indiana Fever, reigning Eastern Conference champions, last week. "There's gonna be a lot of people with numbers in this league, but there's no one that can do both like her."

So in addition to drawing the best of opposing defenses, Jackson is often responsible for anchoring the Storm's defense and drawing tough defensive assignments. On the first game of the season, Jackson guarded WNBA superstar Candace Parker and held her to 10 points on 4-11 shooting. Jackson was later a large part of the reason why the Atlanta Dream -- currently first place in the Eastern Conference -- got nothing from All-Star post players Sancho Lyttle and Erika de Souza when they visited Seattle. Even if she does happen to switch onto perimeter players, she's able to use her height and agility to challenge their shots at the very least. Ranking 6th in the league in blocks and 5th in defensive rebounding, even if a team were to figure out how to stop Jackson from killing them offensively, they'd have to contend with her overall defensive presence.

The fact that San Antonio Silver Stars coach Sandy Brondello has yet to figure out a way to defend Seatte Storm forward Lauren Jackson has to be both disheartening for WNBA teams and encouraging for Seattle basketball fans. She might not have the personnel to stop Jackson but, as she alluded to, who does? If the person who has known Jackson since she was 16 from Australian competition, played with her, and has coached against her cannot seem to find a way to defend her other than hoping she has an off night, what hope is there for anyone else?

As far as I can tell, WNBA players can't jump, run or throw their weight around like their male counterparts. And they do play a more technically adept game. But they are also seriously skilled, in ways that college (amateur) athletes are not, for simple reasons of arithmetic. Both guards handle the ball and run the offense; big men—er, women—post up all over the place, regularly pass off the ball, and reliably hit jumpers like it's expected of them; everyone cuts like crazy, keeping up a level of activity that at some point is bound to outstrip or shed the coach's instructions.

It's less a diminished version of the NBA than a mutant strain of it, not unlike various incarnations of Nellieball or D'Antoni Land.

Jackson might in fact be the best representation of Shoals' argument that the WNBA is the "new frontier" of basketball rather than an inferior variant -- a different type of game that shares fundamental basketball principles with the men's game, but with a different type of sophistication.
Bearing in mind the abstractness of comparing NBA players to WNBA players, in thinking of NBA comparisons for Jackson, the first name that comes to mind for most NBA fans is Dirk Nowitzki because it's so unusual to see a player with legitimate post height roam the perimeter. However, that comparison doesn't quite take account for her toughness in the post or the skill she poses, which might be considered comparable to Tim Duncan or the Pau Gasol that fans have come to accept as a member of the Los Angeles Lakers championship teams.
Yet none of those comparisons really accounts for the full extent of her defensive ability, a combination of athleticism and outstanding instincts that one might argue is similar to any number of outstanding NBA post defenders who are severely limited on the offensive end. Ultimately, we could spend time comparing Jackson to multiple NBA players and end up finding ways that they all have a skill gap that Jackson has covered, to say the least.

Saying that Jackson might be reminiscent of what people understand a cross of Duncan and Nowitzki to be (or perhaps, as mentioned by Shoals, what everyone fantasized Darko Milicic becoming) might sound utterly hyperbolic until you actually show up and get a chance to see her in action a few times. With the level of versatility that Jackson possesses appreciating her is indeed a gradual learning process because, as Agler alluded to, there isn't enough time in a single game to see all that she can do. However, after last night's game, people who have watched the Storm closely all season were left at once speechless and almost unsurprised by Jackson: it is rapidly becoming evident that as much as nobody knows how to stop her, nobody can really predict the way in which she might dominate a game on a nightly basis either.

And, quite frankly, Seattle is lucky to have an athlete of Jackson's caliber.