Gonzaga Bulldogs at Baylor Bears: Turnovers Could Play A Role

Share All sharing options for: Gonzaga Bulldogs at Baylor Bears: Turnovers Could Play A Role 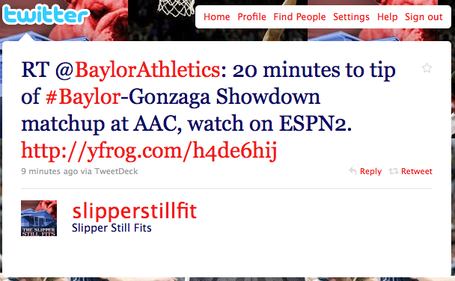 The game is starting a bit later than expected, but when it does begin, Zach Bell of the Slipper Still Fits expects turnovers to play a role if Gonzaga wants to win.

Gonzaga heads to Dallas to take on Baylor...LaceDarius Dunn licks his chops - The Slipper Still Fits
There's only one way I can see Gonzaga winning this game and that is if they increase their pressure on defense. While I sure do love a reactive defense that is predicated on which type of defense, man or zone, sucks less, I think it is time for Mark Few to at least attempt to have his team set a tone on the road. Even if it is simply Demetri Goodson guarding A.J. Walton full-court by himself, you have to pressure an inexperienced point guard. He can amass turnovers in a hurry and Meech plays fantastic on-ball defense. It is a match made in heaven. Better yet, 3/4 court pressure utilizing Steven Gray and Manny Arop along with Meech would be ideal, but, we sure wouldn't want to apply too much pressure.

However while both teams suffer high turnover rates, Gonzaga also turns the ball over more often than opponents whereas Baylor forces more turnovers on their opponents.

Ultimately, the difference in this game might be simply a matter of how much energy Gonzaga brings with them to Waco today.

Gonzaga Bulldogs Upset No. 9 Baylor Bears, 68-64: Sacre Steps Up To Lead The Way