The Big Ten is already backtracking after its new logo and division names were universally ripped following Monday's unveiling. The division names, the Big Ten's attempt at blazing a trail and setting a trend, were completely new and unlike anything in college football to date. The intentions were good, and meant to highlight how the Big Ten molds its members, but the execution was subpar. 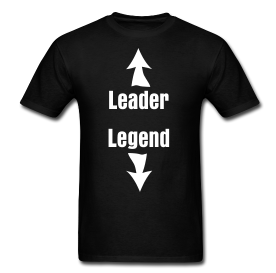 This little gem, passed along by EDSBS, was one budding businessman's attempt to capitalize on the Big Ten's gaffe. The backlash, and merciless criticism aimed at commissioner Jim Delany and the Big Ten, was, apparently, too much to take. How bad was it? Delany said the conference, and its new branding efforts, received a 90 percent non-approval rating this week.

With the conference in full damage control mode, Delany needs the public's help. Facebook pages have been created and fans are sending in suggestions, all in an effort fix the Legends and Leaders mistake. But with the conference aligned in a non-geographical way, traditional options are out the window.

The divisions, aligned with parity in mind, are:

What can we call them now that Legends and Leaders appears to be on the way out?

Michigan and Ohio State - Because that was the real reason the divisions were aligned this way.
Smash and Mouth - Big Ten football!
Lakes and Plains - The most logical names I've seen.

And thus, you have the hazards of just placing teams in divisions. Brand identifiability in college football centers on conference alignment. An alignment the rest of the nation can understand, and easily identify, makes for an easy branding opportunity. It's why the Pac-12 stuck with North and South.

As we mentioned before, Larry Scott and the Pac-12 were praised when unveiling the new divisions and logo. Contrast that with the Big Ten this week. Delany is stuck between a rock and a hard place, already the butt of every college football related joke this week. Short of blowing the idea up and starting anew, it's going to be tough for Delany and the marketing heads at the conference headquarters to fix this.

Oh, and there's still this little problem to deal with.

On the plus side, the Big Ten is ready for the inevitable expansion to 16 whenever that day may come.