Nike is using the BCS National Championship Game as a vessel to unveil new uniforms, showcasing a new material and design for its flagship guinea pig, the Oregon Ducks. The Ducks are well-known for the million different uniform combinations in their arsenal, serving as a Nike billboard each Saturday. With the Ducks playing on the nation's biggest stage in January, Nike took the opportunity to up the ante, using a fashion show to reveal the jerseys as a marketing campaign on Tuesday morning.

The Ducks, as the BCS No. 2, will be wearing a road uniform in Glendale, going with a simple, clean white combination against the Auburn Tigers. The design itself isn't eye-popping at all, unlike uniforms of the past. White jersey, white pants, gray helmet and ... wait ... LOOK AT THOSE SOCKS. 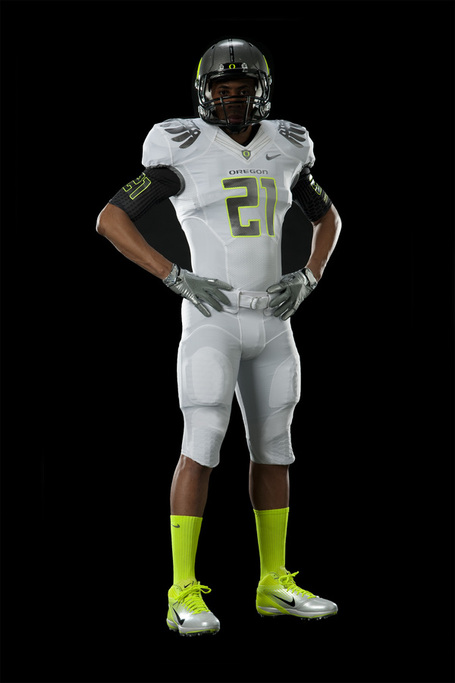 More pictures of the new uniforms after the jump.

The Oregon uniforms, typically much maligned, aren't that bad at all for the BCS Title Game. Outside of the highlighter socks, it's a simple color combination that's easy on the eyes. 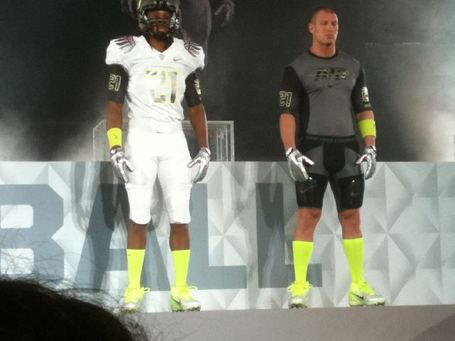 The socks, and sweat bands, look a whole lot like the Seattle Sounders "Electricity" alternate kit, worn in friendlies and Open Cup competition during the 2010 season.

Overall, however, I find it hard to complain about Oregon's uniforms. Nike took a scaled-back approach to bowl game uniforms this year, opting for simplicity over a big splash. Below, the other two "new" uniforms, to be worn by Florida and Boise State this bowl season. 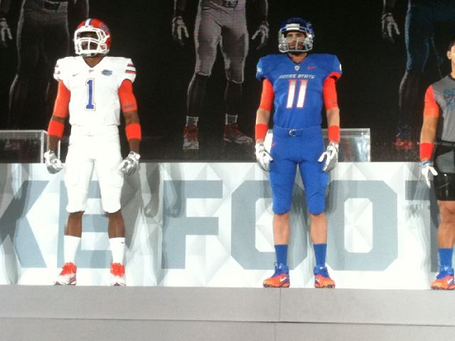 Again, simplistic, classic and generally a clean look. In my opinion, it's a job well-done by Nike.

For more on the Nike uniforms, head on over to SB Nation's StoryStream.