UW Basketball: Bryan-Amaning Looks To Keep Up The Intensity Against Eastern Washington

Share All sharing options for: UW Basketball: Bryan-Amaning Looks To Keep Up The Intensity Against Eastern Washington

There really aren't many strong conclusions that we can take from the University of Washington's blowout of McNeese State University.

However, it did produce at least one storyline that we'd all like to see continue: whether Matthew Bryan-Amaning is finally reaching the potential that we've all hoped he would.

McNeese State was simply overmatched and had no answers for either Bryan-Amaning or Aziz N'Diaye for that matter. And although Eastern Washington stands to put up more of a fight than McNeese State did, this is still more of a tune-up that the Huskies should win than a real test of who this team is. As if the Huskies needed more reason for optimism, EWU is also contending with injuries to two point guards in Glen Dean (stress fracture in his foot) and Cliff Colimon (ankle sprain).

Official Athletic Site of Eastern Washington University
Guards Kevin Winford and Jeffrey Forbes are the replacements, as well as athletic 6-foot-7 forward Tremayne Johnson. In all three games thus far, Eastern has had to piecemeal together a team from its 15-man roster that has had nine players miss games or practice time already -- eight because of injuries.

"We have the philosophy to coach the guys that are out there, but that’s become pretty hard," admitted Eastern head Earlywine. "To be perfectly honest, it’s been really hard the last two weeks. In practice we don’t have a point guard running either team."

The lack of an experienced point guard was particularly noticeable in a 66-60 exhibition loss to Montana State-Billings on Nov. 8 as Eastern had only four assists and made just 15-of-60 shots from the field. The Eagles had 12 assists and made 37 percent from the field against San Jose State, but had 12 of their 17 turnovers in the second half after leading 36-33 at intermission.

So the real question for fans who have been watching Bryan-Amaning over the course of his career in Seattle is whether he can maintain the intensity he showed on Sunday afternoon.

Heart to Heart Refocuses Bryan-Amaning - University of Washington Official Athletics Site
"Coach wants me to play with a lot of intensity. ... He said I stopped (doing) that last year."

For example, when the usually demonstrative Bryan-Amaning dunked he was showing little emotion.

That came back when his game did, in February. He's been roaring ever since. He scored a career-high 28 points and had 13 rebounds - two short of another career best - in just 23 minutes of Saturday's opening thrashing of McNeese State. He screamed to punctuate a wind-milling, right-handed slam early in that game. Everyone else's jaws dropped when he sprinted on a break and threw down a reverse dunk later. 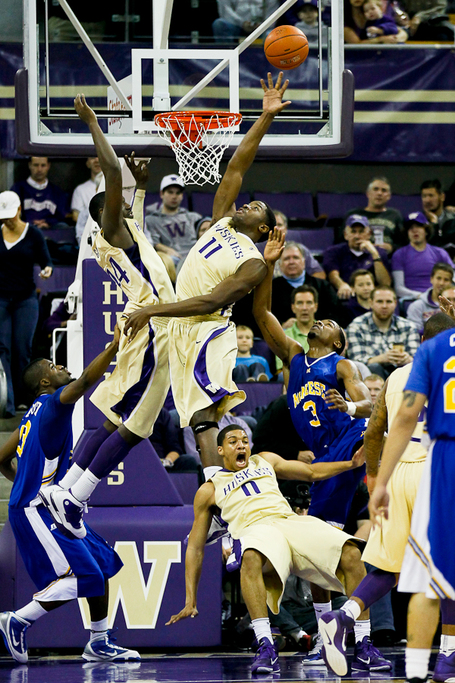 For those UW fans that have watched Bryan-Amaning during his career in Seattle, the game was unlike what we've seen before and we obviously would like to see more from him. A couple other observations from last game leave some things to watch for.

Things To Watch For:

Keys To The Game:

UW Overwhelms Eastern Washington In Second Half To Win 98-72